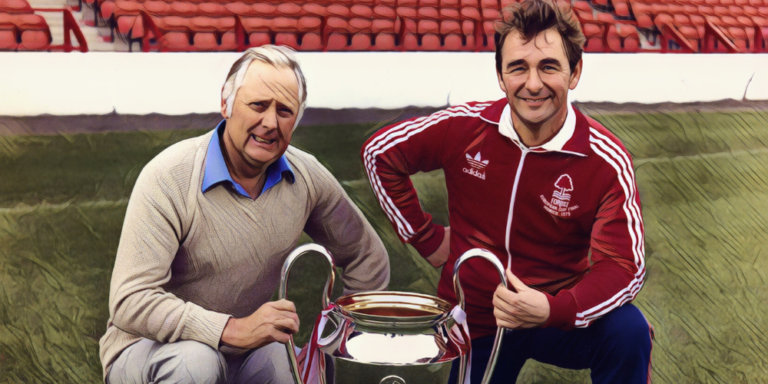 First at Derby County and then famously at Nottingham Forest, two extraordinary men who would have books written about their friendship and fallouts, and films made of their feats, won First Division titles and European Cups, both plural, along with an assortment of domestic silverware.

It is a lifetime’s achievement, times two, that words cannot do justice to. Unprecedented comes closest. Astonishing, incredible, and remarkable meanwhile all dramatically undersell the Seventies equivalent of taking the reins at, say, Peterborough United and turning them into Premier League champions in the space of four years, then repeating the miracle at Bristol City, before surreally lifting the Champions League two years running with the Robins, besting the likes of Bayern and Barca on route.

Along the way, a plethora of has-beens, forgotten fare, and supposedly average talents metamorphosed into world class players under their charge. Along the way, this former Middlesbrough goalie and former prolific Middlesbrough striker subverted reality as we knew it then and know it now. Two generations on and it’s still difficult to believe what they did or make solid sense of it all.

Brian Clough and Peter Taylor’s stars aligned at Boro in the mid-1950s. The latter facing the former in a trial game and imploring the north-east club to take a chance on the young forward despite Clough failing to impress. He would go on to score 197 goals in 213 appearances.

An alliance was formed that day, one that took them to Hartlepool several years later, the older Taylor stepping into management as a natural progression post-retirement; the younger, sharper – in tongue and personality – Clough donning a tracksuit aged just 30, embittered from having his career cruelly cut short by injury. A promotion was secured. A 16-year-old John McGovern – who would play under Clough at Derby, Leeds and Forest – came through the ranks. Soon enough, Derby came calling.

Not that the Rams was a glamour gig. The Baseball Ground was a muddy bog and the players were mostly journeymen, content with their lot. As for the club, the only trophy in their boardroom cabinet was a FA Cup, won in a year where no league commitments took place due to the last knockings of the Second World War.

With their lives to that point merely rehearsals to a greater destiny, Clough and Taylor wasted no time in tearing into County, reforming it root and branch. Tea-ladies were sacked for laughing at a defeat. The squad was overhauled with under-appreciated players from Cardiff, Tranmere and Preston brought in for nominal fees. This was moneyball 40 years before moneyball became a thing.

With a team now unified and electrified, and completely unrecognisable from the team that went before it, promotion to the top-flight was earned, an accomplishment indeed. Three seasons later this backwater club, stationed in a ramshackle ground, wrestled a league title away from a Liverpool side featuring Keegan and Toshack, St John and Heighway, and managed by the incomparable Bill Shankly.

Astonishingly, incredibly, and remarkably, history repeated itself at Forest, with two climbs of the continental summit thrown in for good measure. It was a widely documented rags to riches tale that made Clough a household figure, third in fame behind James Callaghan and the Queen.

In between these two works of wonder by the Trent there was failed stints at Brighton and Leeds, with Clough isolated, minus his north star Taylor. On the south coast and in attempting to dismantle, then reconstruct an indomitable Leeds collective, ‘Old Big ‘Ead’ was Lennon without McCartney and with only his enormous ego to act as a soundboard Clough was exposed for being mortal after all. The truth was, he needed Taylor, the only person on God’s green earth he’d listen to. Especially on the occasions he felt he was right but knew deep down he was wrong.

The dynamic between them informs every iconic duo who have ever straddled music or comedy or sport in that Taylor’s strengths were Clough’s weaknesses and visa versa. In practical terms, Clough was the showman; the inspirational driving force who often bent fate to go his way through sheer force of will.

Taylor meanwhile was the more considered architect whose eye for an emerging talent was second to none. It was he who saw greatness in a chubby, drifting winger called John Robertson. It was he who orchestrated the staggering transformation of Kenny Burns, from a savage forward of limited stature to a cultured centre-half admired throughout the game.

If their traits differed, so too did their personalities, with Taylor uncomfortable with the spotlight and reserving the forceful side of his character solely for players who under-performed. In stark contrast, Clough was all charisma – the ‘shop window’ as he once referred to himself in a rare moment of self-deprecation.

He could have a twinkle in his eye and the devil at the same time and if players sought out Taylor’s respect they desperately wanted their manager’s approval, even if that translated only to the avoidance of reproval. They were, should we resort to cliché, yin and yang, an ego and his alter-ego. “It was an incredible relationship. It was almost telepathic at times. It just worked, there was some sort of formula, some sort of magic there”. That was Nigel Clough, speaking of his father and the avuncular Taylor. They were also, above all else though, friends.

It was a friendship that soured immensely when Taylor wrote an autobiography that was essentially a biography of his partner and was irrevocably severed when they became opposing managers in the Midlands, with Taylor’s luring of Robertson to Derby – a transfer conducted without Clough’s knowledge – the final straw.

From that day forward the only words exchanged were in the public domain, and usually took the form of Clough aiming a barbed comment in the direction of his former confidant. They never spoke again with Taylor passing away, aged 62, in 1990.

If the final chapter of this astonishing, incredible, and remarkable story is sombre however, we should recall instead the other pages. A tale that Hollywood itself would blush at, that led two extraordinary men to change our perception twice-over of what was possible, and by doing so alter the footballing landscape for the better.

Read Also – Iconic Duos: The prototypes of the modern full back, Cafu and Roberto Carlos

The post Iconic duos: Clough and Taylor – The ego and alter-ego who forever transformed British football first appeared on The Football Faithful.