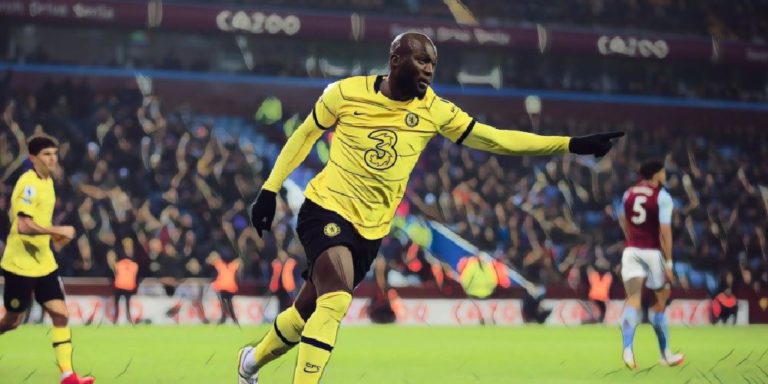 Romelu Lukaku came off the bench to play a pivotal role as Chelsea came from behind to earn a 3-1 win over Aston Villa.

Chelsea came into the game on the back of an indifferent spell of form, winning just three of their last eight games in all competitions atfer being among the early-season title favourites.

It was an entertaining opening period at Villa Park, with both sides carving out opportunities at each end of the pitch and it would be Villa who struck first in the 28th minute. Matt Targett’s whipped delivery from the left flicked off the head of Reece James and flew past Edouard Mendy, although the Senegalese could perhaps have done better.

The lead would last just five minutes, however, as Matty Cash clumsily brought down Callum Hudson-Odoi in the area, before the returning Jorginho sent Emi Martinez the wrong way from the resulting penalty.

Thomas Tuchel brought Romelu Lukaku on at half-time, and the Belgian wasted no time in making his presence felt, glancing a header beyond Martinez following a cross from Hudson-Odoi from the left for his first Premier League goal since September – also against Aston Villa.

Villa enjoyed spells of possession as they looked to get back on level terms, though Chelsea had the better of the chances, Martinez making a vital save from Hudson-Odoi while Mason Mount spurned an excellent opportunity after beating the Argentine ‘keeper to the ball.

Chelsea would make sure of all three points in added time though, Lukaku racing into the box before being brought down by Ezri Konsa, leaving Italian midfielder Jorginho to step up and despatch his second penalty of the game – his 10th of 2021.

Jorginho is the first player in Premier League history to score 10 penalties in a single calendar year.

Speaking after the game Tuchel was pleased with his side’s reaction after going a goal behind, before revealing the details of his patched up side.

“We showed a very good reaction after their goal,” he told BBC Sport. “The own goal made things super complicated. The reaction was very good. We defended strong and did not allow big chances. It was a deserved win but hard work.

“We have concerns for injured players. We let Callum Hudson-Odoi play 90 minutes after Covid. Thiago Silva got injured. N’Golo Kante is injured. Mateo Kovacic is playing after injury and Covid without any preparation and training. We’re just filling holes where we can fill them.

“We play teams without international duties. Five changes were invented because of Covid. Now we’re in the middle of Covid and some teams are having games postponed and others aren’t. Three changes is a big disadvantage.”

There has been a clamour for more protection of players in recent weeks, with some managers leading calls for five substitutes to be reintroduced following the recent Covid rate rise. Asked if he felt it was a possibility, however, Tuchel said: “Zero chance.

“We are the only league who play in winter which I love but we’re not protecting the players. All other leagues have five changes. Then we compete against them in the Champions League. It’s a bit frustrating. It will not stop.

“Brighton will play a super physical game then we have two games against Spurs, who are out of Europe and fully focused on the league and Carabao Cup.”

9 – Romelu Lukaku has scored nine goals in 10 Premier League appearances against Aston Villa; he hasn’t scored more against any other opponent in the big-five European leagues in his career. Villain. pic.twitter.com/1041ej5fAC

Lukaku’s goal was his ninth goal in his 10 Premier League appearances against Villa, and Tuchel admitted that the 45 minutes that he was given was more than the club medical department had advised.

“No, I was not aware of his record against Villa. I should have known this before,” he said. “We decided at half-time to have a bit more threat and create more problems. I was happy he was involved.

“He was the game changer today. We took a lot of risks – 45 minutes was more than the medical department recommended. Who knows if it’s the right thing to do.”

The post Lukaku the ‘game changer’ as Chelsea come from behind to beat Aston Villa 3-1 first appeared on The Football Faithful.