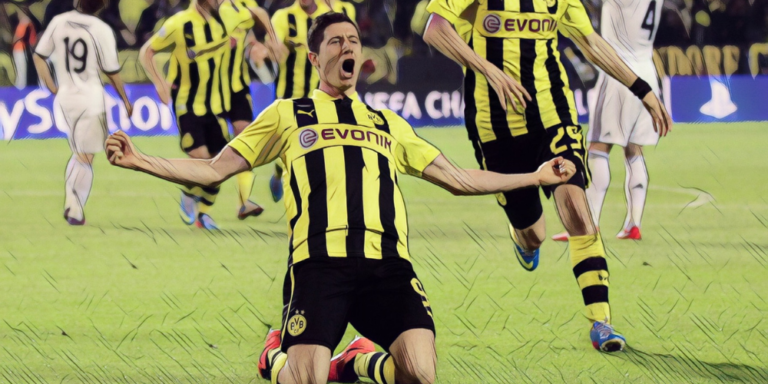 When the time eventually comes for Robert Lewandowski to hang up his boots, he will do so as one of the most devastating natural finishers of the modern era and leave the game as a generational goalscoring great.

Lewandowski’s extraordinary levels of consistent brilliance have become almost normalised in recent seasons, a footballer for who breaking records is routine and one who ranks as arguably Germany’s finest footballing import.

It was not always destined to be this way however, released as an underdeveloped teenager by Legia Warsaw he was forced to drop down Poland’s football pyramid before rising remarkably to the upper echelons of the world game.

He signed for third-tier side Znicz Pruszków in a bid to revitalise his faltering sporting dream, firing the club to promotion before a second chance at the top-level with Lech Poznan – a side which provided him the stage to demonstrate his instinctive natural talents.

Goals – as they would do in almost unprecedented fashion in seasons to come – soon began to flow, whilst the soon-to-be familiar feeling of lifting silverware started during his prolificacy in Poznan.

Unsurprisingly his performances soon attracted interest from Europe as a young Lewandowski outgrew his surroundings in his native Poland, the now legendary tale of an Icelandic ash-cloud putting the breaks on talks over a Premier League move to Blackburn.

It was that disruption of air travel that allowed Borussia Dortmund’s proposal to move ahead of the queue, and a deal worth €5m was agreed for the forward to head to Germany.

Football would soon witness the birth of a star at the Westfalenstadion.

For almost every great of the game, there has been that breakout performance, an individual display that makes the world sit up and take notice.

Lewandowski’s destruction of Real Madrid in the semi-finals of the 2012/13 Champions League remains arguably the definitive performance of his career, even given the countless accolades that have followed since.

His star, of course, was rising rapidly even before that unforgettable night in north-western Germany, having played a prominent role in Jurgen Klopp’s entertaining Dortmund side that won back-to-back Bundesliga titles.

Whilst his maiden season ended with a winners’ medal and title celebrations, his role was restricted with just nine goals across all competitions as he adapted to a new country and competition.

He exploded the following year with a 30-goal campaign as the title was retained alongside a first-ever domestic league and cup double for BVB, their potent Polish forward netting a hat-trick as Bayern Munich were thrashed 5-2 in the DFB-Pokal final.

Lewandowki’s stock had never been higher and a fearless Dortmund side sought to conquer Europe the following season after domestic dominance, finishing top of a Champions League group containing Real Madrid, Manchester City and Ajax in unbeaten fashion.

Through to the knockout stages for the first time in a decade, Dortmund brushed aside Shakhtar Donestsk over two legs in the last 16, before a dramatic quarter-final tie with Malaga saw stoppage-time goals from Marco Reus and Felipe Santana snatch victory from the jaws of the defeat.

Real Madrid awaited in the semi-finals in a rematch of their group stage clashes, two fixtures that had seen Dortmund take four points from the most decorated side in Champions League history.

The first semi-final had seen Bayern Munich thrash Barcelona 4-0 at the Allianz Arena and Dortmund’s dismantling of Spanish opposition the following night suggested that the balance of power in European football had shifted to Germany.

Real headed into the clash as favourites but were undone by a masterclass in finishing from Dortmund’s leading light, Lewandowski enjoying one of the most iconic individual showings the Champions League has witnessed.

Dortmund swarmed the Spaniards from the very opening minutes, the black and yellow shirts buzzing with energy and aggression as if their illustrious visitors had kicked the hornet’s nest.

It took just eight minutes for Lewandowski to make his mark on the contest, Mario Gotze’s in-swinging cross met on the stretch by the Poland international as Dortmund’s famed ‘Yellow Wall’ euphorically erupted.

Cristiano Ronaldo’s equaliser just minutes before half-time threatened to hand Real Madrid the initiative in the tie, but this was a night that belonged to Lewandowski following 16 incredible second-half minutes.

His second of the evening came just five minutes after the restart, Jakub Błaszczykowski keeping the attack alive with a header into Marco Reus, whose scuffed shot is collected on the turn by Lewandowski and fired home.

Real Madrid protested vigorously over suspicions of an offside, but the goal stood and Dortmund were back ahead and back in control.

It was nothing less than Jurgen Klopp’s side deserved following a performance of character, quality and swashbuckling attacking football, with Lewandowski’s hat-trick goal a sensational piece of striking brilliance.

Marcel Schmelzer’s cross found its way to the forward through a collection of white shirts inside the penalty area, the star taking one touch to steady before a sublime drag-back to pirouette away from Pepe and Xabi Alonso and a rifled finish into the roof of the net.

No player had ever scored a Champions League hat-trick against Real Madrid, but Lewandowski was not done yet.

Alonso’s foul on Reus provided an opportunity from the penalty spot and the prolific Pole made no mistake, thrashing an emphatic finish beyond Diego Lopez to become the first player in history to score four times in a Champions League semi-final.

Dortmund’s football was astonishing as they overpowered Real with frenetic energy and pressing play, regaining possession high and seizing their opportunities to inflict damage upon their overwhelmed opponents.

It was cohesive and intentional chaos from Klopp’s charges, whose breathtaking bursts of speed and stamina were spearheaded by the sublime talents of a goalscoring genius.

Dortmund’s romantic run was ended in agonising fashion with final defeat to Bayern Munich, the perennial powerhouse of German football awaking from a lull to reclaim their mantle as both the nation and Europe’s finest.

The beaten finalists won hearts during a memorable period of success but were unable to hold off the Bavarian behemoth for too long, Bayern chief amongst the clubs central to the dismantling of Dortmund’s daring side as Mario Gotze, Mats Hummels and Lewandowski all made the move to Munich in the following seasons.

Lewandowski’s defection to the Allianz Arena on a free transfer ended an era for Dortmund and helped start a new period of utter dominance for Germany’s most successful side, with only the legendary Gerd Muller having ever scored more goals for Bayern.

The celebrated talents of Cristiano Ronaldo and Lionel Messi are the only two players to have scored more Champions League goals and there’s a growing case that Lewandowski is approaching all-time great status.

Quite possibly the best and most complete out-and-out forward of the modern era, his singlehanded semi-final destruction of Real Madrid was a performance impossible to forget.

Read – Iconic Performances: Rivaldo and the greatest hat-trick ever scored