PODIUM FINISH IN PORTUGAL SPURS ADAM TO DO SAME IN VALENCIA

PODIUM FINISH IN PORTUGAL SPURS ADAM TO DO SAME IN VALENCIA 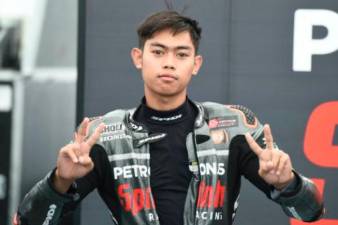 The Liqui Moly Intact SIC Racing Team rider for the Moto2 race hopes that the hard work shown by his teammates during last week’s race can continue in the next race.

“Alhamdulillah (thanks to AlIah), I met the target to get a podium position in the first race, thanks to the crew involved who worked hard as well as to all who supported me to ensure it (success) happened this week.

“In the second race there was a mistake in the early stages but I still managed to finish in fourth place, so there is still room for improvement in the race in Valencia,” he said in a video recording to reporters, today.

Yesterday, Adam finished the first race at the Estoril Circuit, Lisbon in third place with a time of 30 minutes and 49.94 seconds.

The race was won by Spanish rider Fermin Aldeguer of the Boscoscuro Talent Team Ciatti team who clocked 30: 40.7s while his compatriot and teammate Alonso Lopez was second (30: 42.15s).