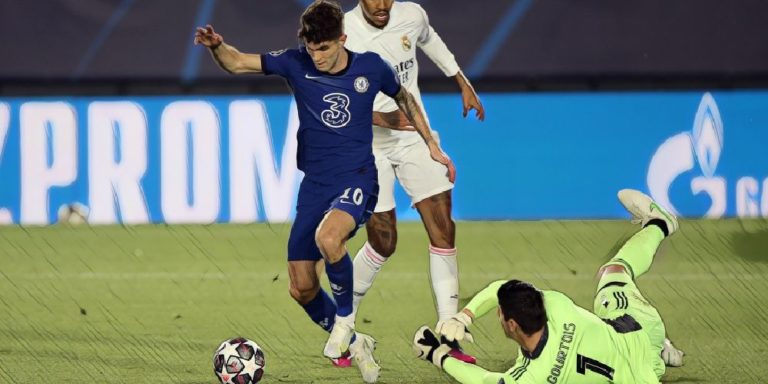 Thomas Tuchel admitted he was left a bit disappointed despite Chelsea earning themselves a slender advantage as they earned a 1-1 draw with Real Madrid on a rain-soaked night in the Spanish capital.

The Premier League side settled into the game by far the quicker, with Real Madrid having been sent out with a somewhat unfamiliar three at the back as they looked to match Chelsea’s shape while covering for the absence of Sergio Ramos.

Real Madrid ‘keeper Thibaut Courtois was forced into action early on, Mason Mount leading a breakaway for the Blues, playing it towards the back post to Christian Pulisic, the American playing it back across goal to Timo Werner whose tame effort was straight towards the former Chelsea stopper.

The Blues would however take the lead moments later, Antonio Rudiger playing the ball over the top and in behind Los Blancos’ defence, with Pulisic taking a touch, keeping his cool to round Courtois before firing past the Belgian.

After a quiet start to the game, the home side would pull themselves level just before the half-hour mark, a corner from the left being played short to Marcelo, who swung a cross towards Casemiro. The Brazilian won his header at the back post, the ball flicked on by Eder Militao, before Karim Benzema controlled on his head and acrobatically swivelled and blasted past Edouard Mendy on the volley.

20 minutes into the second half, Thomas Tuchel would make a triple change in a bid to inject a bit more zip back into his sides play, while Zidane turned to former Chelsea hero Eden Hazard. However, neither side could find a breakthrough on a wet night in Madrid, leaving Chelsea with the narrow advantage of an away goal to take back to Stamford Bridge.

Speaking afterwards though, Tuchel expressed his disappointment at not being able to score more than the one goal, suggesting his side were ‘a bit tired’.

“We started the game very very well, with a lot of courage and quality,” he told BT Sport. “We deserved to win the first half, we had chances. Unfortunately, they scored from a set-piece and they had nothing else, we didn’t allow [them] any chances.

“It was a disappointing score at half time. We had to stay calm and not lose confidence. The second half was very tactical, you could feel that we are a bit tired. We only had a few days to recover from another tough away game. We have to live with 1-1.

“The goal was well deserved and we should have scored at least one more. We conceded more or less out of nothing and that can always happen against individual quality.”

Next up for Chelsea is a game against relegation-threatened Fulham, before next weeks second-leg against Madrid.

The post Tuchel left a bit disappointed despite Chelsea’s away goal advantage over Real Madrid first appeared on The Football Faithful.