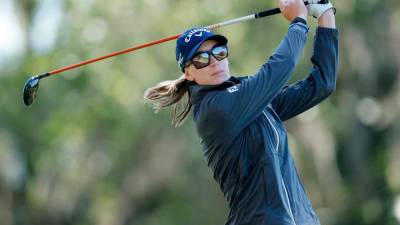 LOS ANGELES: Jenny Coleman (pix) pulled off the upset of the day at the LPGA Match-Play Wednesday, knocking off world No. 5 Brooke Henderson 1-up to open round-robin play at Shadow Creek in Las Vegas, Nevada.

Canada’s Henderson, a 10-time winner on the LPGA tour, got off to a hot start, taking a 3-up lead with birdies at the first three holes.

She kept her nerve after Henderson again edged ahead at 13 – where the Canadian’s bogey beat Coleman’s double bogey – nabbing birdies at the par-five 14th and 16th to take the lead.

“Yeah, started off the first hole just fairway, green, 30-footer – almost went in. Picked up whatever for par,” Coleman said. “And then she comes over, drains a 30-footer. I was like, ‘All right.’

“Then the next two just slapped it around, got a little quick and missed them right and a quick 3-down.

“Then fourth I was like, ‘All right, it’s time to regroup and just catch my stride,” said Coleman, who matched Henderson’s birdie at the fourth to get herself back on track.

When she squared the match at 11, Coleman said, she wasn’t really keeping track of how the match stood.

But, she said, “I felt the tides kind of turn. I was catching my stride, hitting some good shots, making some birdies, some good up and downs, and just trying to keep to my game plan.”

Second-ranked Park In-bee split the point with Jennifer Chang, the South Korean superstar winning the 18th to gain the tie.

Chang had seized 2-up advantage by winning the sixth seventh and eighth holes, and she remained 1-up as they headed to the last.

“I made a lot of clutch putts,” Chang, ranked 259th, said. “I’m sure she probably didn’t have her A game, but, again, wherever she hit off the green she was going to get up and down and I knew that, so I just had to give myself a chance for birdie or save pars to tie with her.”

There was no cutting it close, however, for sixth-ranked Danielle Kang, a Las Vegas native who pummelled Switzerland’s Albane Valenzuela 7 & 6.

“This is my home golf course,” Kang said. “I know to hit it, where to miss it. I think that’s a big advantage that I have, knowing the reads, how the greens break.”

Round robin play continues Thursday and Friday before knockout rounds at the weekend in the five-day tournament.

The round robin field is divided into 16 groups, and the winner of each group will advance to the weekend – with any ties to be decided by a sudden-death playoff. – AFP