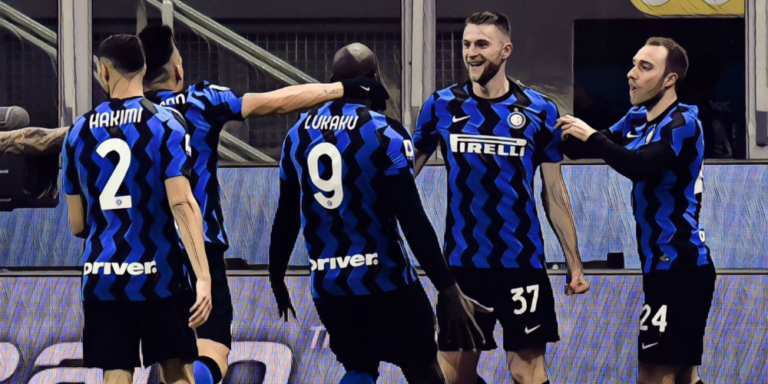 Inter Milan’s celebrations after winning a first league title in over a decade have proven short-lived, with manager Antonio Conte leaving the club after a dispute with the ownership.

Conte guided the Nerazzurri to a first Serie A title success since the 2009/10 season this term, but after being informed that the club needs to cut costs has walked away from the San Siro with a year still remaining on his deal.

Inter’s ownership are reportedly keen to cut the Italian’s wage bill by around 20% before the start of next season, whilst there are plans to raise as much as €100m from player sales to cover the club’s spiralling debts and the financial cost of the ongoing pandemic.

The financial situation could lead to the sale of several assets and with money scarce across football at present, could there be an opportunity for Europe’s elite to sign potential bargains?

Here are five Inter Milan players who will attract interest this summer.

Inter Milan’s record signing could be amongst the players to leave this summer, with Chelsea having been strongly linked with re-signing the Belgium international.

Manchester City have also been mooted as a potential destination as the Premier League champions seek a replacement for Sergio Aguero, and Lukaku’s performances since leaving England having only enhanced his reputation as one of Europe’s most reliable goalscorers.

The 28-year-old eclipsed the record of Ronaldo Nazario to become fastest player in history to reach 50 goals for Inter, reaching the landmark figure in just 70 appearances following his £73m arrival from Manchester United.

Lukaku finished the 2020/21 season as the second-highest scoring player in Serie A behind only Cristiano Ronaldo, though no player directly contributed to more goals with the forward’s 24 goals coming alongside 11 assists – one less than the league’s leading assist provider in Atalanta’s Ruslan Malinovyski.

2020/21 was the season Romelu Lukaku proved he is one of the most complete centre-forwards in the world.

Lukaku’s proven track-record in English football makes him an attractive option for Premier League teams, whilst his sale would go a long way to solving Inter’s cash problems. However, finding a club willing to make a bid in line with his value could prove challenging given the current financial climate.

Achraf Hakimi’s arrival from Real Madrid was amongst the signings that helped transform Inter from contenders to title winners, the right-back having impressed during a two-season loan at Borussia Dortmund before making the move to the San Siro.

Hakimi thrived in an advanced wing-back position under the guidance of Conte this season, the Moroccan’s explosive pace and creativity seeing him shine as one of the best attacking full-backs in Europe.

The 22-year-old ranked amongst Serie A’s leading players for goal-creating actions and crosses in 2020/21, whilst his brilliant end product was demonstrated with seven goals and eight assists in just 29 league starts.

Whoever gets Hakimi this summer is hitting the jackpot pic.twitter.com/t2Ztwgw9Ji

Real Madrid are understood to have a buy-back option on the star, though it appears unlikely that will be activated this summer. Hakimi has insisted he remains happy at Inter but his hand may yet be forced by Inter’s finances, with Arsenal and Bayern Munich linked.

Alongside Lukaku, Martinez stands as Inter Milan’s most saleable asset with a host of Europe’s biggest clubs having been linked with a move for the Argentina international in recent months.

Barcelona, Atletico Madrid and Real Madrid are all admirers of a player who has flourished over the past two campaigns, scoring 17 league goals during Inter’s victorious 2020/21 title-winning season.

The 23-year-old has formed a brilliant partnership with Lukaku this season and would provide a fine long-term option for any side seeking attacking reinforcements, his ability to play leading the line or in deeper role offering versatility.

Martinez has previously been compared to compatriot Sergio Aguero, the man Manchester City are currently looking to replace, whilst Liverpool and Chelsea are also seeking forward additions.

Inter had previously demanded a fee in excess of £100m for the star, though that figure could drop significantly if the club’s board become desperate to cut costs and bring in much-needed funds.

Milan Skriniar has routinely been linked with a move to the Premier League, the likes of Manchester United and Tottenham amongst those credited with an interest in the Slovakian international.

Both clubs remain in pursuit of centre-back additions this summer and a cut-price swoop for Skriniar could appeal, the 26-year-old perhaps at the perfect age to take on a new challenge after five seasons in Italian football at Sampdoria and Inter.

Skriniar is an assertive and aggressive defender who could thrive in English football alongside the right defensive partner, with the centre-back having ranked joint-9th in Serie A for pass completion in 2020/21 at 92.4%.

The defender fell out of favour with Antonio Conte towards the end of last season, but bounced back to play an important role in Inter’s title success alongside centre-back partners Stefan de Vrij and Alessandro Bastoni.

Marcelo Brozovic has been amongst the names rumoured to be available for transfer this summer, despite the midfielder’s influential role in Inter’s title triumph.

Brozovic has bounced back from a difficult start to his Inter Milan career to become a cornerstone of the side, a move to Sevilla coming close to fruition three years ago before former manager Luciano Spalletti cancelled the deal.

That has proven a wise decision as Brozovic has grown in influence and stature at the San Siro, screening the midfield in his defensive role to earn links to Manchester United and Liverpool.

As the deepest of Conte’s preferred midfield three, Brozovic is tasked with conducting the play and has performed admirably in his role as the metronomic figure of Inter’s title-winning team.

Brozovic’s press-resistant technique and ability to carry the ball forward could make him a valuable addition with the 28-year-old sure to attract interest if made available for transfer.

The post Fire sale? Five Inter Milan players who will attract interest this summer first appeared on The Football Faithful.