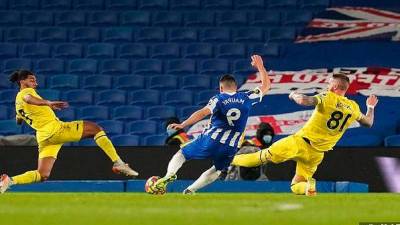 BRIGHTON: Brighton & Hove Albion ended their 11-game winless run in the Premier League after superb goals from Leandro Trossard and Neal Maupay helped them to a 2-0 home win over Brentford (pix) yesterday.

The result lifted Brighton to ninth place in the standings on 23 points from 17 games while Brentford are 13th on 20 points as Seagulls boss Graham Potter stretched his perfect record against opposite number Thomas Frank to five victories.

Potter was pleased with a solid performance as Brighton celebrated their first league win since September.

“First half especially I thought we were really good,” he told Sky Sports. “Nice to score two goals and keep a clean sheet. We needed our goalkeeper in the second half as Brentford, as you would expect, responded.”

Maupay, who joined Brighton from Brentford in 2019, was relieved his team finally got back to winning ways.

“It is not any nicer to score against my former club,” he said. “I didn’t want to celebrate because they are the club that gave me a chance four years ago.

“No-one wanted to sign me in France, they were basically the only one who gave me the chance. When you don’t win in a while people start talking and it starts putting a bit of pressure on. This is a good night for us.”

Brighton enjoyed the lion’s share of the possession in the first half and Trossard fired them into a 34th-minute lead when he beat visiting goalkeeper Alvaro Fernandez with a delightful lob after a long ball from Enock Mwepu.

Trossard made it 2-0 in the 42nd as he unleashed an unstoppable shot into the top corner from the edge of the penalty area after a flowing move left the French forward with time and space to pick his spot.

Brentford sprung back to life after the break and missed three chances in quick succession, with home goalkeeper Robert Sanchez denying Shandon Baptiste and Ethan Pinnock before Marc Cucurella cleared a header off the line.

Fernandez parried a curled shot from Brighton substitute Steven Alzate in the 86th minute before Sanchez pulled off another fine save at the other end, keeping out a Sergi Canos effort with his foot.

Brentford boss Frank conceded his side paid the price for a slack first-half performance.

“In general we did not do enough to have a chance to win. We were not sharp on touches, decision making and passes.” — Reuters