German FA to speak with Flick about national team job

German FA to speak with Flick about national team job 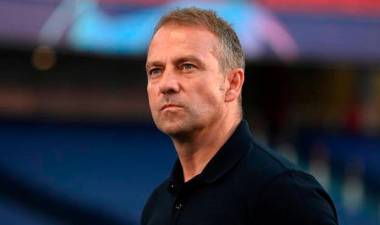 Flick will leave the reigning German champions at the end of the season after he asked Bayern to be released from his contract, with RB Leipzig coach Julian Nagelsmann named as his successor.

“It’s well known that Hansi Flick is held in high regard by the federation. We can confirm that, in this context, we will now also have discussions with him and Bayern officials,” a DFB spokesperson told AFP subsidiary SID.

“At this time, we will not be making any more comment on the rest of the procedure, which we will coordinate internally first with all the parties concerned, with all the necessary care and calm,” the spokesperson added.

Flick won the Bundesliga and German Cup last season and added the Champions League and his side could wrap up the German title again early next month, but his relationship with Bayern’s powerful sporting director Hasan Salihamidzic has deteriorated over transfer policy.

The 56-year-old is considered the German FA’s primary choice to take over from Loew, who is set to step down after the European Championship following 15 years in charge.

The DFB had repeatedly said in recent weeks it would not approach a coach still under contract, and ruled out paying any compensation to a club.

Flick served an assistant to Loew between 2006 and 2014, helping Germany win the World Cup in Brazil. He later worked as the DFB’s sporting director. – AFP