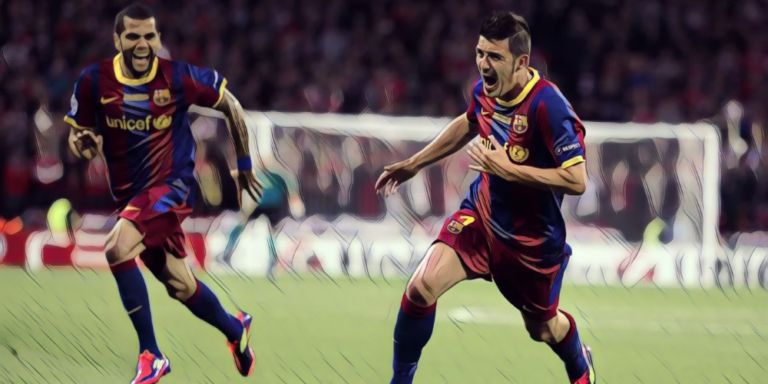 David Villa has reflected on the night Pep Guardiola’s Barcelona produced one of the Champions League’s most iconic performances, a decade on from their final victory against Manchester United at Wembley.

Barcelona beat the Red Devils 3-1 to win the Champions League during the 2010/11 season, their victorious side regarded by some as arguably the finest club football has ever seen.

Goals from Pedro, Lionel Messi and Villa crowned the Catalans champions of Europe for a fourth time, with Sir Alex Ferguson admitting afterwards that Guardiola’s side were the best team he had faced as Manchester United manager.

Villa has now reflected back on their success exactly 10 years since their Wembley win, admitting the occasion was one of the ‘best nights’ of his illustrious career.

“It was one of the best nights of my career,” he told the Mirror. “The importance of the competition, the stadium and the rival and the level of football that we played that night were great.

“And personally being able to participate in the win by scoring a nice goal was amazing.

“I always say that this is the best goal I ever scored because of the importance of the game and the beauty of the shot. It was the dream moment.”

Villa refused to laud Barcelona’s 2011 vintage as the ‘greatest team ever’, but admits the Spaniards wealth of talent proved a ‘perfect combination’ under the management of Guardiola.

“It is very difficult to say [if we were the greatest],” he said. “But for sure we were a great group of players that were formed into a super team under the management of Guardiola. So it was a perfect combination.”

Villa opened up on the celebrations following the club’s Champions League success and says he enjoyed the moment with his travelling family, before revealing his pride at Sir Alex Ferguson’s comments that he would have liked to bring the forward to Manchester United.

“It was a very happy night but nothing crazy,” he said. “The club prepared a nice party and I enjoyed it with my wife, my daughters and my parents that had travelled to London.

“I remember that Sir Alex Ferguson had mentioned that I was the only signing that he wanted to make the year before for United, so he was very kind to me and I felt very proud with it coming from such an important person.

“I still keep in touch with most of that team. We can’t meet regularly because of our different routines but still have a great relationship.

“And it’s the same with Pep, we are genuinely happy each time that we meet and remember these moments.”