Mikel Arteta admitted Arsenal were beaten by the superior side as the Gunners lost 3-1 at Liverpool on Monday evening.

Liverpool ended the Gunners’ 100 per cent start to the season, while extending their own with a victory at Anfield to make it 61 home league matches unbeaten.

Having lost their last two matches to Arteta’s side – one on penalties in the Community Shield – there was barely a time over the 90 minutes when the defending champions looked like allowing it to happen a third time.

Sadio Mane, Andy Robertson and Diogo Jota, on his home debut, all scored after Alexandre Lacazette had been gifted the opener after a Robertson error.

And after the game, Arteta told Sky Sports that he had no complaints with the result.

He said: “We were in the game for a big part of the game. The reality is they are superior to us in many aspects. You could see that is some phases.

“I’m really happy in the way the team competed and kept believing. This is the standard we have to reach. We are on a different journey. They’ve been together five years, we’ve had a few months.

“They scored too early [after Arsenal’s goal], big mistake from us. I had a feeling we were going to have chances in the second half. 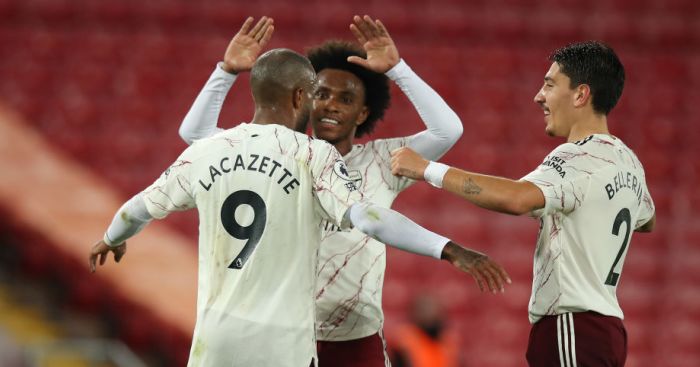 “We had probably the best chance of the game. You have to put them in the net when you have chances against them.

“We have a long way to go in many things.”

“I think with the chances we were creating I felt we had chances of drawing or winning the game.

“When you come to Liverpool away you have to score your chances and not commit the mistakes we made.

“The difference is very fine margins. The team made mistakes in the goals and our chances didn’t go in.

“We were way more effective in other games we played against them. We gave them a good fight but we’re frustrated. We’re getting better every day.”

REAL MADRID keep up MBAPPE plans regardless of Zidane’s future

A pair of unbeatens in the Group of 5 face off, plus what to expect in the Big Ten’s return

How Penn State can make the leap to elite, and more Week 8 thoughts