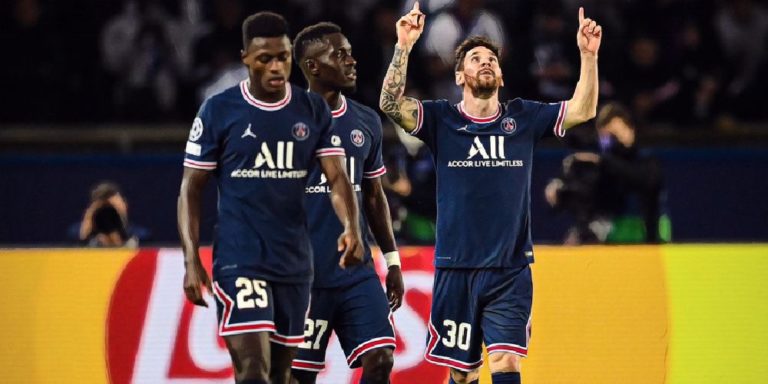 Lionel Messi netted his first PSG goal as the Ligue 1 side beat Manchester City 2-0 in the French capital in the Champions League.

It was a game that would be a repeat of last seasons Champions League semi-final, where Man City had beaten PSG over two legs before suffering defeat to Chelsea in the showpiece.

However, PSG are of course a much-changed side to that which City came up against last term following their stellar summer of recruitment, with Mauricio Pochettino able to call upon signings Achraf Hakimi, Gianluigi Donnarumma, Nuno Mendes and Lionel Messi from the off.

The French side would take the lead in just the seventh minute of the game, and while Pochettino has a somewhat stellar cast of performers at his disposal, it was one of the somewhat less glamorous names who netted it. Kylian Mbappe got to the byline down the right before cutting the ball back to Neymar, and while the Brazilian could only manage to swing and miss his attempt, former Everton midfielder Idrissa Gana Gueye picked up the scraps and dispatched the ball into the top corner.

City would squander a wonderful double chance to equalise midway through the first half, Raheem Sterling getting up to meet a delicious Kevin de Bruyne ball only to see his headed effort come back off the crossbar before Bernardo Silva followed in and inexplicably also managed to hit the bar from just a couple of yards out.

De Bruyne was perhaps fortunate to remain on the field following a late challenge on goalscorer Gueye, though the Spanish referee only opted to show a yellow, one of only a few decisions that seemed to go City’s way at times.

Guardiola’s side did come out with a bit more attacking intent in the second half, though PSG would defend resolutely before breaking away to extend their lead with 16 minutes to play.

1 – Manchester City have suffered their first UEFA Champions League group stage defeat since September 2018, when they lost 2-1 to Lyon; they had been unbeaten in 18 such games coming into tonight. Halted. pic.twitter.com/C3bMBpRjyd

Lionel Messi picked the ball up on the right and drove towards the City box, playing it into Mbappe on the edge of the area who flicked it back to the Argentina ace who struck a typically exquisite first-time finish into the top corner to leave Ederson flat-footed and send the Parc des Princes wild.

City continued to fashion opportunities to reduce the deficit late on, though PSG held on to secure all three points to move to the top of Group A, and despite the defeat, Pep Guardiola was pleased with his side’s overall performance.

“Good performance,” he told BT Sport. “We did everything except score. They defended deep and were dangerous with counter-attack.

“My biggest compliment for the team.

“In the second half Donnarumma made good saves. The team was there – the same as Stamford Bridge. It’s a pity. We played to win. Unfortunately, they didn’t need much to score their goals.”

“The [Messi] goal was fantastic.”

Next up for City is an away trip down the M62 to face Liverpool at Anfield, the Merseyside outfit having beaten Porto in Portugal in their Champions League group game.

“We’re going to eat good tonight, drink a glass of wine, recover and prepare for the Liverpool game.”