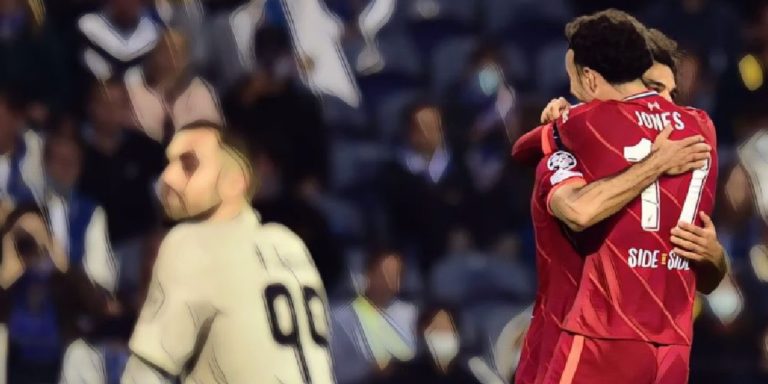 Liverpool cruised to a resounding 5-1 win over Porto in the Champions League, the Reds taking advantage of some consistently woeful goalkeeping in a game that Curtis Jones impressed.

The two sides last met back in 2019 with Liverpool running out 6-1 winners on aggregate in the quarter-final stages, Jurgen Klopp’s side going on to lift a sixth European Cup in Madrid a couple of months later.

After an initially bright start from Porto, the Premier League side got themselves in front after just 16 minutes, Curtis Jones driving at full-back Jesus Corona, cutting in from the left and firing towards goal. His effort was parried into a dangerous area by goalkeeper Diogo Costa, the ball striking the legs of defender Zaidu before dropping kindly into the path of Mohamed Salah who had the simple task of tapping it over the line from a few yards out.

The Reds would dominate the contest from there on in and generated a number of presentable chances throughout the first half, with Diogo Jota in particular guilty of being a tad wasteful in front of goal though they would deservedly extend their lead on the stroke of half time.

Auxiliary right-back James Milner whipped in a cross from the right only for the goalkeeper to inexplicably leave the ball, with Sadio Mane left with the easiest of tasks of tapping into an empty net at the back stick.

Shortly after the break and Liverpool started to pull away, Jones again involved in the buildup as he won the ball on the halfway line, drove to the edge of the box and slipped the ball through to the unmarked Salah, before the Egyptian took a touch and dispatched the ball through the legs of Costa to make it 3-0.

Porto would pull one back through a smart headed effort from Mehdi Taremi with 15 minutes to play, though within two minutes, they would find themselves trailing by three once again as Costa had another moment of absolute madness.

The 22-year-old ‘keeper ridiculously raced out of his goal as he attempted to meet a Curtis Jones pass into the channel, Roberto Firmino latching onto the ball and rolling into the back of the net from all of 40 yards, the Portuguese stopper somewhat hilariously racing back towards his goal in a fruitless attempt to keep it out.

Magical night for the 20-year-old. pic.twitter.com/hupmv6mf8S

A few minutes later and Firmino bagged his second of the evening, Jones’ strike from distance hitting a defender and dropping to the Brazilian who cooly slotted past the Porto keeper – the goal eventually being confirmed after a lengthy VAR check after initially being ruled out for offside.

The result maintains the Reds position at the top of Group B, and Jurgen Klopp was pleased with his side’s performance.

“First and foremost the most important thing is the result,” he told BT Sport. “It is a massive one away at Porto. Winning, and the way we won, makes it better.

“It was good in lots of moments. We could see Porto watched our last game at Brentford. They started direct. I wanted to get it sorted on the pitch and that’s what we did step-by-step.

“We scored maybe not the most amazing goals but important ones in the first half. In the second-half we controlled the game. Porto had massive problems. One centre-half out with a red card and the other, Pepe, not being able to play before the game. We could use that.

“We played wonderful football between the lines, we lost the ball in a situation we should not have. Defensively we played a super game. Goals happen so I am not too concerned.

“I am happy that Diogo Jota didn’t score, he keeps the goals for games we need them. We did not need his goals in the end tonight.

“It was a really good night for us. After the international break we play Atletico [Madrid] so we will see what the boys coming back are like. It is a good start.”

Next up for Liverpool is a home game against Man City, who suffered a 2-0 loss to PSG in their Champions League group.

The post Klopp reacts as Liverpool register 5-1 rout in Porto first appeared on The Football Faithful.