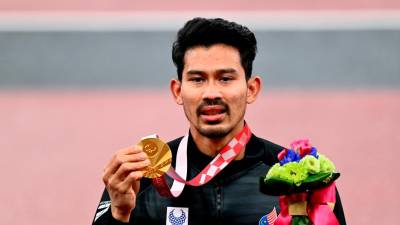 Menteri Besar Datuk Seri Azlan Man said the cash incentive was in recognition and appreciation of the 24-year-old Abdul Latif’s achievement at the Paralympics, which brought glory to the country and Perlis.

“Today, the whole state rides on the success of Perlis-born Abdul Latif. As such, the state government decided to give him this incentive today,” he said.

Azlan handed over the incentive to Abdul Latif at the Menteri Besar’s office. Also present were the athlete’s mother Salmah Yatim and father Romly Mat.

Abdul Latif, who also won gold in the same event at the 2016 Rio Paralympics, said he would rest at his home in Beseri until the end of October before returning to the National Sports Council (NSC) in Bukit Jalil to resume training.

“For now, my coach Shahrul Amri Suhaimi has given me some time to rest,” he said.

Abdul Latif said that once he returned to training, he would prepare for three meets next year, namely the World Para Athletics Championships in Kobe, Japan; the 4th Asian Para Games in Hangzhou, China from Oct 9-15; and ASEAN Para Games in Vietnam (still not confirmed). – Bernama