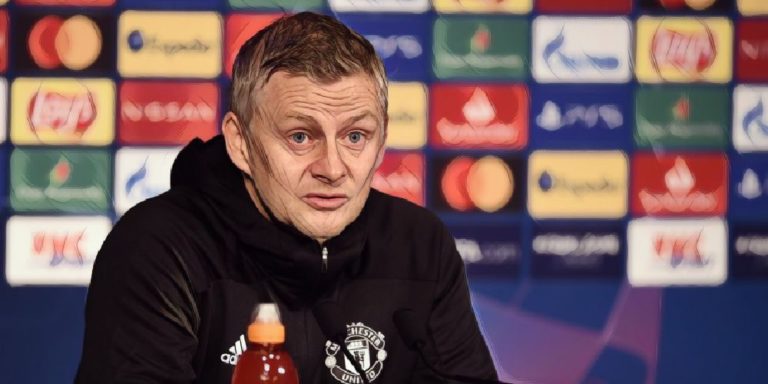 Ole Gunnar Solskjaer says he is planning on embracing the mounting pressure that is being placed upon him following a poor recent run of form for Manchester United.

Man United have lost three of their last four games in all competitions, including a 1-0 loss to West Ham in the Carabao Cup before another 1-0 loss to Aston Villa in the Premier League at the weekend.

During that game, United enjoyed the majority of the ball and had 28 attempts, though only four of them were actually on target while Bruno Fernandes blazed a 95th minute penalty high into the Stretford End.

Speaking in the wake of that defeat, Gary Neville conceded that his former side are unlikely to win the league due to their lack of defined playing style and team cohesion.

“I think you have to be a unit in and out of possession, and when you only deliver in moments, those moments won’t go for you in certain games. You need patterns of play, you need a way of playing, and at this moment in time I still see a group of individuals playing in moments, with some patterns and combinations at times, but still a team where some are pretty new together – Cristiano Ronaldo, Raphael Varane, Jadon Sancho – but they’ve got to come together as a team and start to define a style of play. Then you start to get results when you don’t play well.

“The way they are at the moment, they’ll always have days like Saturday against Villa. They’ll have patches of four or five games where they only win two, but then they’ll go and win 15 on the bounce and be unbeaten away from home for a while.

“That’s the type of team they are. I have called them the odd bunch, because I still look at them and think of them as a team who win games in moments.

“I look at Chelsea, Liverpool and Man City, they are teams. They put team performances in. That’s not to say United never do, but Ole now has to get United into a team.”

United will look to get back to winning ways when they host Villarreal on Wednesday night in the Champions League, a side they lost to on penalties in the Europa League final back in May.

Asked about Neville’s comments, Solskjaer insisted he was working on ‘patterns’ of play, suggesting United rushed their attacking play against Villa.

“I have not read that. Of course you are working on your style of play, your patterns,” he said at his pre-match press conference. “The Aston Villa game we broke up play really well, attacked maybe too fast. Gary knows that. Maybe we did it too fast.

“I don’t think I’ve seen any game with less efficient playing time. It was 44 minutes the ref gave us, but 45 minutes of effective playing time is one of the lowest I’ve ever seen, normal 55, 60.

“If you slow it down too much it might be a low-block again. We know Villarreal will defend well. We need to play quickly, but Gary knows what DNA is here at the club.”

Neville has also commented that his former teammate will be under real pressure to deliver honours this season following the club’s backing of him, though the Norwegian has insisted he is he will embrace the pressure on his shoulders.

“He has always got loads to say!” he said of the former right back.

“The pressure is a privilege. To work in this environment you have to embrace it. I have got to say I have been backed and the progress has worked well.

“We will get there hopefully, around April and May.”

The post Solskjaer responds to Gary Neville comments and says he plans to ’embrace’ mounting pressure first appeared on The Football Faithful.