The eighth matchday of the Indian Super League was filled with some cracking festive action, as we saw five top-notch goal-laden matches. The pick of the action saw Matti Steinmann excel for East Bengal, Kerala Blasters bring up their first victory of the season and David Williams score a cracking goal. Here’s the best of matchday 8:

Team of the Week

Albino Gomes has been inconsistent so far this season, but this week he gave one of his better performances, as he looked assured between the sticks against Kerala Blasters. The Indian shot-stopper got a clean sheet after making 5 saves, 4 of which were from shots inside the box, and let 29 long balls fly,

Ashutosh Mehta returns to the right-back spot in our Team of the Week after a solid display against Odisha FC, where he contributed at both ends of the pitch. The 28-year-old defender looked quite good as he got 50 touches, completed 74% of his attempted passes, whipped in 6 crosses, won all of his aerial duels, made a couple of tackles and interceptions and got an assist.

Benjamin Lambot joins Ashutosh Mehta as the second NorthEast United player in our defence, as he too did brilliantly at both ends of the pitch. The Belgian centre-back racked up 63 touches, maintained a passing accuracy of 89%, completed 9/11 long balls, made 4 clearances, 2 interceptions, as many blocks and a goal.

Yet again, Stephen Eze makes the left centre-back role his own in our Team of the Week, this time for a superb display against FC Goa. Although his side conceded two goals, the Nigerian defender looked brilliant as he made 6 clearances, 5 tackles and interceptions, blocked 3 shots and won 4/5 aerial duels.

Kerala Blasters’ captain for their first win of the season makes our Team of the Week for the first time this year, as Jessel Carneiro features on the left of defence. The 30-year-old full-back did very well to contain the explosive Liston Colaco against Hyderabad FC, making 3 tackles and interceptions, as many clearances, winning 4/6 duels and getting 41 touches.

The third Kerala Blasters player in our Team of the Week is Rahul KP, who looked brilliant down the left flank against Hyderabad FC. He troubled Akash Mishra throughout the match, getting 57 touches, attempting 4 dribbles, 3 crosses and making 6 tackles and interceptions.

Teenage midfielder Jeakson Thounaojam wins our Young Player of the WeekAward for his superb showing against Hyderabad FC, where he brilliantly neutralised most of the Nizams’ central threat and linked his attack and defence. The former Indian Arrows man got 45 touches, completed 77% of his passes, won 4 duels and made 3 tackles and interceptions.

Matti Steinmann became East Bengal’s second goalscorer in the ISL with a match-saving brace against Chennaiyin FC, but his goals weren’t his only contribution in that match. The German midfielder controlled proceedings for his side, getting 65 touches, completing 84% of his passes, making 4 clearances, 3 tackles and interceptions and scoring with both of his shots.

David Williams’ ISL 2020/21 campaign didn’t get off to an ideal start as he was recovering from a foot injury he sustained in pre-season, but he finally looks to be fully fit. The Australian forward scored an absolute cracker of a goal to help his side gain all three points against Bengaluru FC, while also getting 44 touches, 24/28 accurate passes, 3 shots, as many tackles and 2 crosses.

After blanking in his last two appearances following a superb start to life in India, Igor Angulo was back to his best for FC Goa as he won the match for them with a slightly-lucky brace involving a penalty and an unintentional goal off the back of his head. He needed 24 touches to net with both of his shots, while also winning 4 duels and creating 1 chance.

Jakub Sylvestr has still only scored one goal in the Indian Super League, but he is progressively getting better in the Chennaiyin FC attack despite failing to find the back of the net. While he may not have been able to hit the back of the net with any of his 8 shots, he was undoubtedly very good as he got 47 touches, completed 78% of his passes, 5 key passes, created 2 big chances and got a couple of assists. 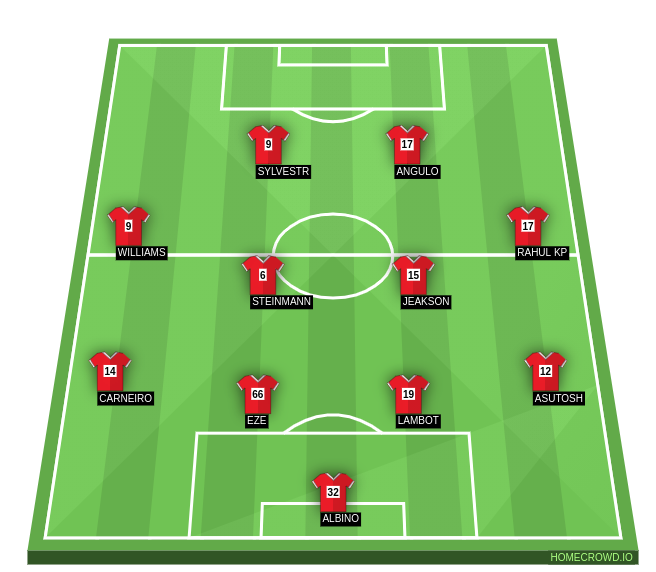 Manager of the Week:

After joining a club of Kerala Blasters’ stature following an I-League winning campaign with Mohun Bagan, Kibu Vicuña’s start to life in the ISL was terrible, as he failed to win any of his first six matches. Upon that professional disappointment, the Spanish tactician suffered personal tragedy as his mother passes away. However, he decided to stay with the club throughout, and his dedication was finally rewarded last time out against Hyderabad FC, when his decision to drop big names like Gary Hooper, Bakary Koné and Costa Nhamoinesu paid off. It was a brilliant team performance from his side, where the young and relatively inexperienced players particularly excelled.

Goal of the Week:

Assist of the Week:

Jakub Sylvestr may not have brought his shooting boots with him for Chennaiyin FC’s clash against SC East Bengal, but he certainly got his assisting shoes as he set up both of his side’s goals brilliantly. The second one just edges it for us, because it is an incisive no-look pass in behind the defence for Rahim Ali.

Save of the Week:

Jakub Sylvestr did miss a few big chances against SC East Bengal, but when he did hit the target, Debjit Majumdar was always equal to him. This stop wins Save of the Week as the keeper got down quickly and effectively to keep the Slovakian striker’s bottom corner-bound effort out.

Miss of the Week:

Aridane has been a prolific goal-scorer for Hyderabad in the opening stages of this season, but he really disappointed against Kerala Blasters when he missed some great chances. The biggest of his opportunities came when Asish Rai squared a low ball brilliantly into his path, but e somehow missed the target altogether.