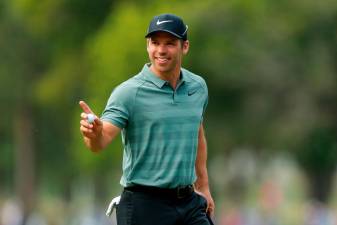 MIAMI: England’s Paul Casey (pix) chases a third consecutive Valspar Championship victory starting Thursday, but it has been two years since he teed off in the US PGA Tour event.

Casey captured the 2018 and 2019 titles on the par-71 Copperhead course at Innisbrook resort in Palm Harbor, Florida.

But last year, the tournament became the first to be totally wiped out by the Covid-19 pandemic, having done all the preparation for the event only to have it canceled.

“It does feel like forever,” Casey said Wednesday. “It feels like an extraordinary amount of time. Last year was surreal. I really was disappointed obviously not to be here.

“I’m excited to be finally back and I’m sure everybody else is, too.”

Casey edged Tiger Woods and Patrick Reed by a stroke for the 2018 crown then defended the title in 2019, beating South Africa’s Louis Oosthuizen and American Jason Kokrak by a stroke for his third US PGA win.

“I’ve won back to back, I’m looking for a third and I feel like my game is good,” Casey said.

“I’m going for a three-peat. I’ve never had a three-peat as a professional, and I feel like the pressure is not on me.

“We’ve got Justin Thomas and guys like that playing this week, and the focus is going to be on them, so I feel like I’m kind of in a sweet spot and raring to go.”

World No. 20 Casey captured his 15th career European Tour title in January at Dubai and managed his best major finish with a share of second at last August’s PGA Championship.

“I feel very happy with the game,” Casey said. “There’s nothing I’m worried about. We’re trying to peak every single week.

“I’ve got a lot of great golf left ahead of me, great championships I want to try and win, so I feel good. I’m still incredibly motivated, still working as hard as I was at the beginning of the year.”

Only eight times in the past 40 years has a player won the same event three times in a row and Woods, out with severe leg injuries after an auto crash, did it six of those times.

The only others were Australian Stuart Appleby from 2004-06 at the Tournament of Champions and Steve Stricker, the most recent to achieve the feat, from 2009-2011 at the John Deere Classic.

“It would just be extremely cool, flat out, I think even more so with the one year sort of hiatus,” Casey said. “I’ve done it but in amateur golf. It’s elite company.

“There are numerous things that I still want to win and wish I had won, so just to add something to the fabric of everything would be very, very cool.”

Copperhead produced the worst greens in regulation percentage of any US PGA event in 2019 at 54.1% and it’s Casey’s skills with the irons on his approaches that has helped make him formidable on the layout.

“There’s a premium here on medium to long irons into greens,” Casey said. “The second shots into a lot of those par-4s are requiring 175 to 200 plus shots in, and I’ve always been very, very good in that area.

“A lot of spin control, the trajectory of those shots that I hit. That’s where the premium is and that’s what I do well.”

Past Masters champion Tyrrell Hatton of England, Sepp Straka, Will Gordon and Brice Garnett were forced out of the field after testing positive for Covid-19. – AFP