Heat no problem for world No. 6 Kang

Heat no problem for world No. 6 Kang 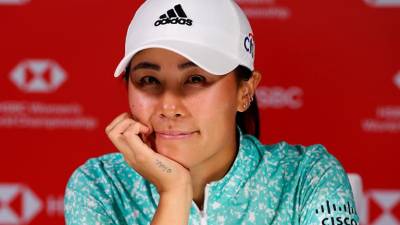 SINGAPORE: Ranked No. 6 in the world, Danielle Kang (pix) is feeling refreshed heading to one of her favourite locations on tour. Playing in the HSBC Women’s World Championship at Sentosa Golf Club for the seventh time, Kang will be looking to go one better than she did in 2018, when she had to settle for tied second place behind fellow American Michelle Wie.

As she prepares for another week on the LPGA Tour, Kang said she’s set a strategy with what she’s been working on at home and from what she gained following a week away from tour.

“I think trusting my game and trusting my short game, that’s one part that I can trust, my wedges. And this golf course I think having the green speed and knowing the breaks on the greens and things like that, the golf course knowledge will be really helpful,” said Kang.

With the Singapore heat sapping the energy of many of the golfers during practise rounds, it’s not a problem for Kang who favours the hot conditions.

“The heat, I don’t know, I think it slows me down. I can’t run around like a headless chicken like I normally do. I can’t get too emotional. It’s too tiring. I can’t walk that fast. Everything just slows down and I think that’s a good thing. Gets you to breathe,” said Kang.

“I prepare with different types of Vitamin C drinks and I drink a lot of Airborne on the golf course, nice energy, steady energy and knowing when you need sugar spikes and everything like that. Pretty aware of my body. I think that’s one thing that I do have going for me in the heat.”

Commenting on the LPGA Tour’s first event in Asia since 2019, Kang added: “I honestly really wanted to come to Singapore. I love it here. It’s one of my favourite cities in the word. I think the government and all the people at IMG and everyone are making it super safe and effective for us to compete out here with the Pro-Ams and the bubble and all that.

“So I love how Singapore is known for its rules and enforcing them and I like how people are really respecting the rules and that’s how it should be anywhere and everywhere.”

Major champion Patty Tavatanakit, who makes her HSBC Women’s World Championship debut, is just pleased to be back in this part of the world.

“You know, I’m just really glad that we’re all back in Asia and playing again. I haven’t been in Asia at all since the pandemic. Love Singapore, always love visiting, I just wish we could do more things outside the hotel, but we’re not allowed to due to the restriction right now, which is fine, but I always enjoy coming here and playing golf here. The course is in great condition, and everyone is just so welcoming.

“Really appreciate all the work that the tournament staff and HSBC and all the sponsors that put everything together this week. I can’t imagine how hard it must be.”

Reflecting on the pressures that followed the win that propelled her to international stardom at the start of the month, Tavatanakit added:

“It was overwhelming to the point where I didn’t know that it was overwhelming because I had never really experienced that, and now looking back, yeah, I was like really overwhelmed by the attention I got because I’m not really used to having to give so much energy to a lot of people, but I feel like going through that, I’m learning a little bit more.

“But taking on this week, I feel like everyone has been treating me so nice, and for some reason I’m just really happy to be here. I always love coming here, and it’s a great feeling. A lot of gratitude going on.

“The whole thing, how hard it is to have a tournament here and everyone being able to put it together, I just feel so grateful to be here. It’s not easy, I know that for a fact, like coming in through the immigration process and everything. It’s tough, and getting through all that, I’m just really excited to play.”

Japan’s Hinako Shibuno competes in her first HSBC Women’s World Championship and is relishing the opportunity to be in Singapore.

“I’m happy, you know, I have friends in the tournament and I’m happy about being here on the LPGA Tour,” said Shibuno.

Winner of the 2019 AIG Women’s Open, the 22-year old from Okayama, who is known as the “Smiling Cinderella” after the victory at Woburn Golf Club, has begun to flourish with her opportunities on the LPGA Tour.