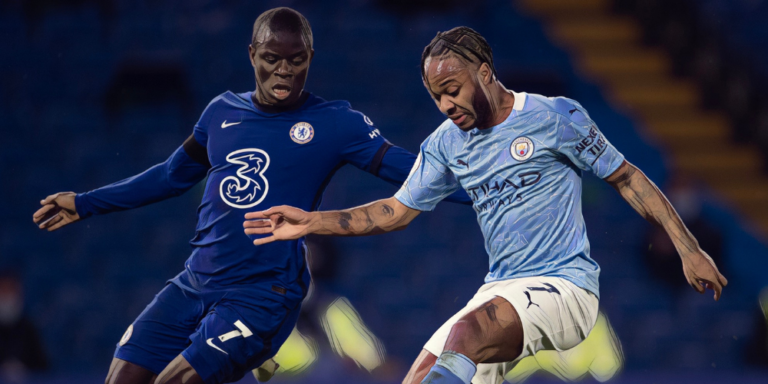 Chelsea and Manchester City meet this weekend for the chance to be crowned champions of Europe, the familiar opponents facing off in the 2021 Champions League final.

It’s the eighth time the Champions League final has been contested between two teams from the same country, and the third time that two Premier League sides have met on club football’s grandest stage.

Pep Guardiola’s Manchester City side have reached the showpiece for the first time in their history, where they will be hoping to add the Champions League to their Premier League and League Cup successes to seal a historic treble.

Chelsea have upset the odds to reach this stage following a remarkable improvement under Thomas Tuchel and will be seeking a second success in the competition, whilst the west Londoners will take confidence from beating City twice in recent months.

Ahead of the epic clash, we’ve attempted to compile a best XI from the two sets of players, here is our Chelsea and Manchester City combined side.

Edouard Mendy has enjoyed a strong debut season at Chelsea to strengthen a previous weakness, but Ederson remains a unique and invaluable part of Manchester City’s title-winning side.

The Brazil international has won the Premier League’s Golden Glove award for the second successive campaign, becoming just the fourth multiple winner of the accolade after keeping 19 clean sheets this season.

More than just his reliability in denying opposition sides, however, the 27-year-old’s renowned ability with the ball at his feet is a crucial component of City’s style of play. Ederson’s comfortability in receiving possession – alongside a superb passing range – has revolutionised and altered expectations of goalkeepers at the highest level.

Joao Cancelo’s transformation this season has been one of the stories of Manchester City’s success, the full-back bouncing back from a difficult debut season to become one of the club’s most influential assets.

Selecting the Portugal international over Kyle Walker is harsh given the England international’s fine campaign and superior defensive quality, but Cancelo’s ability to step into midfield in his inverted full-back role has been one of the hallmarks of City’s season.

Kevin De Bruyne is the only player in Pep Guardiola’s squad to average more key passes per 90 minutes in the Premier League this season, City’s duo of right-back options a step ahead of Chelsea’s Reece James and Cesar Azpilicueta.

Ruben Dias’ arrival at Manchester City has been arguably the signing of the season with the centre-back recently named as FWA Footballer of the Year for his transformative impact upon the side.

Dias signed in a club-record deal from Benfica and has proven worth every penny so far, starring as the club have won the Premier League and League Cup, with the possibility of the Champions League arriving to complete a treble of major honours.

The 24-year-old is authoritative and dominant in his defending, with the Portugal international having cemented himself as a leader of this side and a player who brings the best out of those around him.

City’s defensive vulnerability cost them both at home and in Europe last season, but Dias’ arrival has turned their fortunes around.

Chelsea’s improvement since Thomas Tuchel’s arrival has been based on solid defensive play, with the likes of Thiago Silva and Antonio Rudiger perhaps unfortunate to miss out on selection here.

It’s hard to look beyond John Stones however, given a season of renaissance that has salvaged a career with Manchester City that appeared all but over heading into the 2020/21 campaign.

Stones’ class and composure in possession had perfectly complimented the aforementioned Dias, whilst the mistakes that littered his play have proven far less frequent with the 27-year-old one of the Premier League’s best this season.

Oleksandr Zincehnko has shown signs of improvement for the Premier League champions this season, though it’s Ben Chilwell who earns our left-back position following an impressive debut campaign at Chelsea.

Chilwell arrived with high expectations following a £50m move from Leicester and has slotted in seamlessly to the Chelsea side, scoring four goals and providing five assists across all competitions for the west Londoners.

The 24-year-old has shown an ability to learn and adapt to a more advanced position following Thomas Tuchel’s arrival, his performances strengthening his case to be England’s first-choice this summer amid fierce competition from Manchester United’s Luke Shaw.

Chelsea’s indefatigable midfield machine has looked back to his brilliant best this season, snapping into challenges and regaining possession in his often one-man crusade against opposition attacks.

Kante has played a pivotal role in Chelsea’s run to the Champions League final and has provided a reminder of his world-class talents, the France international superb against both Atletico Madrid and Real Madrid in the latter stages.

“Everybody knows that Kanté can run for 11 players. He’s everywhere!” @ChelseaFC | #UCLfinal pic.twitter.com/nau9SmGiW5

The 30-year-old will be integral to the Blues’ hopes of lifting the trophy this weekend, as Kante looks to add another chapter to an incredible career that has already included Premier League and World Cup success.

Had Ruben Dias not scooped Manchester City’s Player of the Season accolade, there’s a strong chance that Ilkay Gundogan could have received the award following a career-best campaign at the Etihad.

For so long an understated member of this side, the Germany international came to the fore in the absence of Kevin De Bruyne earlier this season to fire City’s charge towards the title, netting 11 goals in just 12 appearances during a brilliant winning run.

Gundogan’s purple patch proved the inspiration behind the club’s run to title success, his ability to both control games and influence play when pushed further forward showcasing the multi-faceted talents of one of Europe’s best midfielders this season.

The most influential footballer in the Premier League and arguably the best midfielder in the game, Kevin De Bruyne will be looked towards for inspiration as City face former club Chelsea this weekend.

De Bruyne equalled the Premier League’s single-season assist record in 2019/20 and was prolifically productive once again this term despite spells out injured, his 12 assists second only to Harry Kane – whilst no player averaged more assists, expected assists or goal-creating actions per 90 minutes this season.

The 29-year-old is amongst the most complete players in world football right now and one capable of executing passes others have not even seen, a fabulous footballer who will hope to make a definitive impact on the Champions League final.

Riyad Mahrez’s moments in a Manchester City shirt have often been flashes of his potential, but this has been a season in which the Algerian has exerted his influence on a consistent basis.

Mahrez has been one of City’s leading performers this season with 14 goals and eight assists in all competitions, stepping up on the biggest occasions with crucial interventions in the Champions League knockout stages.

This weekend’s final will be the pinnacle of a meteoric rise for the 30-year-old who has proven his big-game credentials this season, stepping up confidently to score a crucial penalty against Borussia Dortmund in the last eight before his semi-final dismantling of Paris Saint-Germain.

Shunted slightly out of position as one of two narrow attacking midfielders in our 4-3-2-1 system, Mason Mount has thrived this season in a number of positions to become arguably Chelsea’s most influential player.

Mount mixes tireless tenacity out of possession with creative quality when on the ball, ranking fourth in the Premier League for pressures and second for both key passes and shot-creating actions.

The 22-year-old has responded to question marks and criticism to enhance his reputation as one of England’s brightest talents, an undisputed starter for Chelsea and a potentially pivotal player for Gareth Southgate ahead of this summer’s European Championship.

Remarkably both sides have reached the Champions League final without a prolific centre-forward amongst their ranks, with Sergio Aguero and Gabriel Jesus out of favour at Manchester City for much of the campaign, and Timo Werner struggling for goals during his debut season at Chelsea.

Starting in a false nine position in our combined side is Phil Foden, who has continued his upward trajectory this season to emerge as arguably the most exciting young talent in the Premier League.

Foden is a wonderfully gifted footballer who has exerted his influence on the City side this season, scoring 16 goals and providing eight assists.

When you look at Phil Foden’s numbers compared to English legends at the same age, you realise just how special he really is

What an incredible talent

The 21-year-old has captivated fans with his guile and genius, possessing an ability to contort himself through defensive challenges and provide moments of creative class.

Foden’s potential has been no secret for some time, but this has been the campaign where City’s home-grown jewell has elevated himself to new heights.