Mikel Arteta says that winning the Community Shield with Arsenal can give them belief for the season ahead.

Last season was a disappointment for Arsenal in the league, as they finished outside the European places. However, they ensured it ended on a high note by winning the FA Cup – thus qualifying for the Community Shield.

And four weeks after guiding Arsenal to victory in the FA Cup final, Arteta won another piece of silverware at Wembley.

Arsenal converted all their penalties to overcome Liverpool in a shootout after the game finished 1-1.

“I’m so happy,” Arteta told BT Sport. “I knew the challenge we were facing today.

“Thank you to the players for the effort and the performance.

“The courage of the team [was the most pleasing thing], how aggressive we were without the ball and to break the pressure of Liverpool. I knew in the second half we would suffer.

“This generates belief, to be able to compete against a team like this in a final makes me happy.” 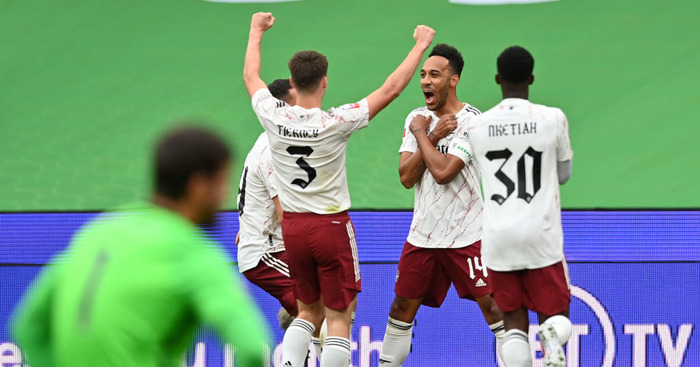 Arteta said Arsenal are “close” to agreeing a new contract with their captain – who was once again reluctant to comment on his own future – after explaining how he stepped up to the mark against Liverpool.

“Big games, big moments, big players,” Arteta said of Aubameyang. “He has responded really well to that kind of pressure.

“He was magnificent in the FA Cup final and the same today.”

Aubameyang himself had admitted just before that it was an “exciting” time to be an Arsenal player.

“We’re going to see in these days,” he said when asked if he would renew his contract. “Today we take the trophy, that’s it.

“We are improving. There is still work to do but I’m really happy and it’s an exciting time to be an Arsenal player.”

Report: How £20m Spurs target feels about leaving PL club after being left out of matchday squad