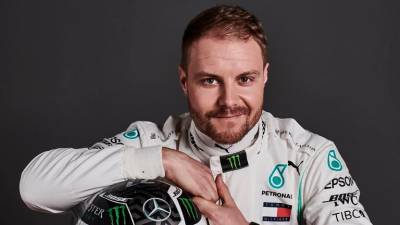 On his 31st birthday, the Finn maintained his habit of being quickest in the first session for a third straight event, with a best lap in one minute and 44.493 seconds to pip the six-time champion by 0.069sec.

Max Verstappen, just 0.081 off the pace, was third for Red Bull ahead of the Racing Points of Sergio Perez and Lance Stroll with Alex Albon sixth in the second Red Bull.

Esteban Ocon was seventh for Renault ahead of Carlos Sainz in the leading McLaren, his Renault teammate Daniel Ricciardo and Lando Norris in the second McLaren.

On a cool day, last year’s winner Charles Leclerc and his Ferrari team-mate Sebastian Vettel were unable to impress as they wound up only 14th and 15th with their opening-session laps.

Verstappen was quickest in the early stages of a session run in overcast conditions, the Dutchman showing the early potential of his Red Bull around the majestic Ardennes circuit before the two Mercedes men showed their power.

Hamilton took top spot. He was succeeded by Albon, demonstrating stronger form than during some recent sessions. The ‘black arrows’ responded, Bottas marking his birthday by outpacing Albon and the defending world champion.

On a disappointing day for Ferrari, their engine customer teams were also in difficulties with both Haas drivers Romain Grosjean and Kevin Magnussen had power unit problems and failed to set times along with Alfa Romeo’s Antonio Giovinazzi. – AFP

Predicted Liverpool lineup against Manchester United: Thiago in for Jones; Matip in contention