(video) Osaka, Azarenka to face off in W&S Open final

(video) Osaka, Azarenka to face off in W&S Open final 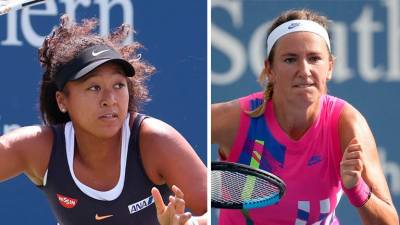 NEW YORK: Naomi Osaka reached her first final of the year, and eighth of her career, with a tight 6-2, 7-6 (7-5) win over Elise Mertens at the Western & Southern Open in New York on Friday.

The Japanese-Haitian star will square off against fellow former world No. 1 Victoria Azarenka, who made it into her biggest final since March 2016 with a 4-6, 6-4, 6-1 success over British No. 8 seed Johanna Konta.

Osaka had initially planned on boycotting the semifinals, joining the wave of protests from athletes across the United States calling for social justice in the wake of yet another police shooting of a black individual.

The tournament organizers, WTA, ATP, and US Tennis Association all banded together following Osaka’s decision and issued a joint statement that announcement tournament play would be paused for Thursday. Osaka in turn opted to participate in the rescheduled semifinals that had been postponed to Friday.

“For me, it’s been a little bit stressful. I couldn’t really sleep last night so I’m really glad I was able to play at a pretty good level,” said Osaka after the match.

Osaka walked on court wearing a Black Lives Matter shirt and was soon up a double-break and serving for the opening set at 5-1. A sublime drop shot from Mertens got her one of the breaks back but it wasn’t enough to stop a locked-in Osaka from taking the set in 39 minutes.

The No. 4 seed started the second set in a hurry, surging ahead 2-0. But this time, Mertens struck right back, breaking the Osaka serve twice during a four-game winning run for the Belgian No. 14 seed.

The momentum swung again as Osaka levelled the set and she saved a whopping eight break points in a marathon ninth game to hold for 5-4. Those missed opportunities did not shake Mertens, who held serve to stay alive in the contest.

Mertens rushed the net to save a match point in game 11 as the set fittingly went to a tiebreak. A superb return from Osaka earned her a second and she found her serve when she needed it to close out the match and reach her first Western & Southern Open final.

Over on Court 10, Konta drew first blood, taking down the Azarenka serve on her way to a 4-2 advantage. The 29-year-old Brit needed eight set points before closing out the opener. Konta hadn’t dropped serve all week but Azarenka finally snapped that streak on her way to clinching the second set and was untroubled in the decider.

Azarenka, a two-time major champion, has had a difficult few years dealing with personal problems that limited her playing schedule at times. The Belarusian admits she considered retirement multiple times, including earlier this season.

“In January, I didn’t know if I was going to play at all. So end of January, I decided, ‘You know what? I might try, last time, and see what happens’,” said the 31-year-old.

Osaka leads Azarenka 2-1 head-to-head. The pair have shown great form this week, getting the perfect preparation for the US Open, which commences on Monday. – dpa