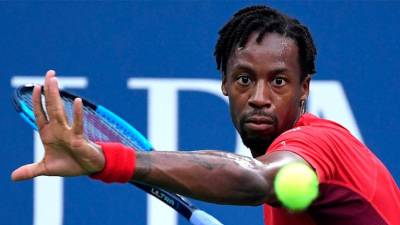 PARIS: Unseeded Kazakh Alexander Bublik upset local hope and eighth seed Gael Monfils 6-4 7-5 3-6 6-3 in the opening round of the French Open on Monday for his first career win over a top-10 player in six attempts.

Monfils, ranked number nine in the world, started strongly to run up a 3-0 lead in the opening set but Bublik stormed back into the match by winning five straight games to take the set.

The Frenchman had a set point in the second but once again saw his advantage wither away as the 23-year-old Bublik, ranked 49th in the world, took a 2-0 lead with a third break of serve in the set.

Monfils, 34, looked out of gas in the third and somehow managed to find some energy to break the Kazakh twice to stay in the running but it was not enough as Bublik closed out the match with a double break in the fourth set.

It was the third successive opening-match loss for Monfils in as many tournaments since the resumption of the professional tour after the outbreak of the COVID-19 pandemic.

“I don’t play well, it’s as simple as that,” said Monfils.

“I’m going to go home, take some time for myself, train and see when I’m going to start competing again.”

The 2008 French Open semifinalist had 12 double faults in the match, many at crucial moments, and his 58th unforced error sealed a second-round spot for Bublik on his second match point. – Reuters