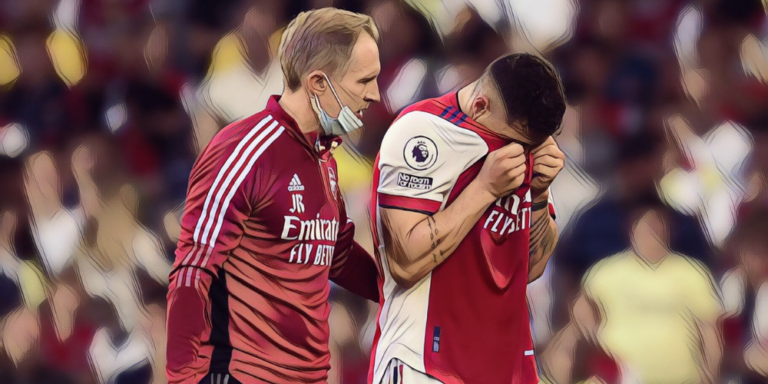 Arsenal have been dealt a blow after confirmation that Granit Xhaka is set for an extended period on the sidelines.

Xhaka injured his right knee during Sunday’s 3-1 North London derby win against Tottenham at the Emirates, with scans having revealed that the Switzerland international has sustained a ‘significant injury’ to his medial knee ligament.

The 29-year-old underwent consultation on Tuesday evening that confirmed the midfielder will not require surgery, with Arsenal having released a statement on the club’s official website estimating a timeframe of around three months for Xhaka’s recovery and rehabilitation.

“Further to injuring his right knee during Sunday’s match against Tottenham Hotspur, assessments and scans have confirmed that Granit Xhaka suffered a significant injury to his medial knee ligament,” the statement reads.

“A specialist consultation took place in London on Tuesday evening which has determined that Granit does not require surgery.

“Granit’s recovery and rehabilitation programme will start immediately and we are aiming for him to be back in action in approximately three months.”

Xhaka has made four league appearances so far this season and was excellent in the win over Spurs, as Mikel Arteta’s side continued their recent upturn in form with a third consecutive Premier League victory.

Summer signing Albert Sambi Lokonga will be expected to fill the void left by Xhaka’s absence, with both Ainsley Maitland-Niles and Mohamed Elneny providing further depth to deputise alongside Thomas Partey in midfield.

Arsenal will be hoping to continue their momentum when the Gunners travel to face Brighton at the Amex Stadium on Saturday evening.

The post Blow for Arsenal as club confirm extent of ‘significant’ Xhaka injury first appeared on The Football Faithful.