Milan fun to watch, but lack of cunning is costing them dear

Milan fun to watch, but lack of cunning is costing them dear 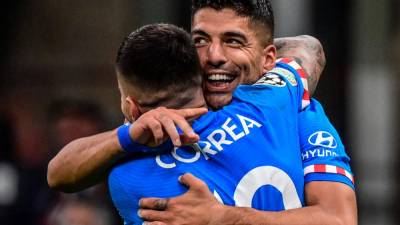 MILAN: So near, but yet so far. They first went toe-to-toe with Liverpool and got burned, before being “robbed” by Luis Suarez (pix) and Atletico Madrid on Tuesday night – a return to Champions League football has been heartbreaking for AC Milan so far.

After waiting seven years to return to the competition they have won seven times – only Real Madrid have more European Cup titles – Milan have provided great entertainment this season.

But exciting football matters little when you are without a point, bottom of your group and up against it to reach the knockout stages of Europe’s premier competition.

On Tuesday night, in their first Champions League match in their iconic San Siro stadium, Milan flew out of the traps against last season’s LaLiga champions Atletico, leading 1-0 after 20 minutes in a raucous atmosphere.

They could have been more than one goal in front, such was their dominance, but one controversial refereeing decision – to dismiss Franck Kessie for two yellow card offences – left them up against it.

The decision was labelled a “robbery” in several Italian newspapers on Wednesday, but even with 10 men, Milan looked set for victory, having held off Atletico into the latter stages of the match.

Antoine Griezmann levelled to break Milan’s resistance in the 84th minute, but one point, from a match against a rival for last-16 qualification is better than none, and seeing out the final few minutes after that leveller should have been of paramount importance.

Instead, an exhausted 10-man Milan launched several counter attacks, committed men forward, and did not even attempt to run the clock down.

A draw would have left Milan one point behind Atletico after two games. With Liverpool seemingly set to finish top of the group on six points, it would have left second spot very much up for grabs.

Instead, Luis Suarez’s penalty gave Atletico four points and left Milan bottom of the pile on zero. The decision to award the spot kick for handball could have gone either way, but it may never had happened had Milan showed more cunning and experience in these tight situations to see the result out.

“When you lose like that, even if we gave our all, these big games are decided by the tiny details,” Milan midfielder Ismael Bennacer told Sport Mediaset after the match.

“Those are what made the difference and it hurts to lose like that.”

It will hurt for a while, but a 97th-minute penalty could have been avoided with more attempts to waste time or taking safer options when on the attack – the tiny details that can make the difference.

A young team can be forgiven for taking such an approach, but lessons need to be learned if they are going to have any chance of reaching this season’s Champions League last 16. – Reuters