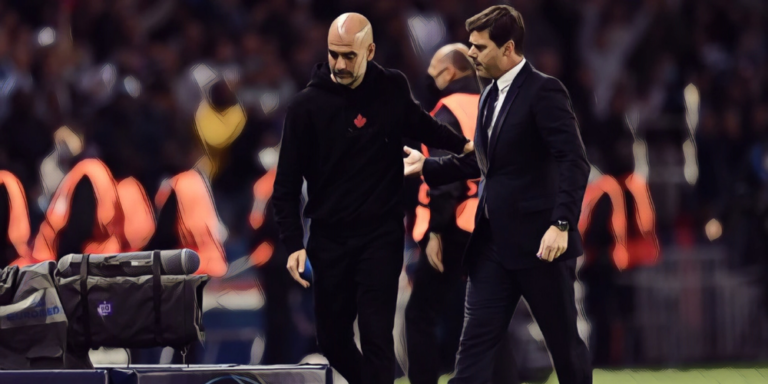 Idrissa Gueye and Lionel Messi scored the goals as PSG secured a huge Champions League win at the Parc des Princes, moving above Guardiola’s side in the race to secure qualification to the knockout stages.

Following Pochettino’s fourth win over a Guardiola-managed side, we’ve decided to look at the four coaches with the most wins over Guardiola.

Pochettino has faced Guardiola on more occasions than any other manager, though PSG’s win against Manchester City on Tuesday was only his fourth in 21 encounters against the Spaniard.

The first meeting between the managers resulted in a goalless draw between Espanyol and Barcelona during the 2008/09 season, as the two coaches lined up on opposite sides of the Catalan divide.

Since then Guardiola has won 12 of the following 20 meetings with Pochettino, including both legs of last season’s Champions League semi-final between PSG and City.

The most significant of Pochettino’s four wins came during the 2018/19 Champions League quarter-finals, a Son Heung-Min goal securing a 1-0 first leg win for Tottenham, who progressed to the last four on away goals following a chaotic 4-3 defeat in the return at the Etihad.

The only manager on this list to have a superior head-to-head record against Pep Guardiola, with Manchester United having won four of the eight Manchester derby meetings since Solskjaer’s appointment at Old Trafford.

Solskjaer has received plenty of criticism during his tenure across the city, but his record against City has been impressive with the Norwegian becoming the first Manchester United manager to win his first three away games against Manchester City.

United have failed to lose in their last four Premier League meetings with Guardiola’s side, winning three and drawing one.

Jose Mourinho and Guardiola are two of the best and most successful managers of their generation, with Guardiola having taken on the Portuguese on more occasions than any other coach.

Guardiola has got the better of their battles with 12 wins from 25 fixtures in all competitions, though Mourinho’s seven successes are the second-most any manager has totalled against the Spaniard.

The first meetings saw Inter Milan face Barcelona on four occasions during the 2009/10 Champions League, with the former emerging triumphant over two legs in the semi-finals on their way to being crowned European champions.

Mourinho’s move to Madrid in 2010 then saw the two go head-to-head for domestic honours, though Mourinho’s first El Clasico meeting ended in a 5-0 defeat to Guardiola’s formidable Barcelona side.

Classic contests followed across the following seasons in a titanic rivalry in Spanish football, before hostilities resumed in the Premier League on opposite sides of the Mancunian divide.

Mourinho and Guardiola shared two wins each from five Manchester derby meetings, though the former has had the recent edge in clashes with their two most recent fixtures resulting in wins for Mourinho’s Tottenham against Manchester City.

Jurgen Klopp has managed more wins against Pep Guardiola than any other manager, having competed for honours in both Germany and England against the Spaniard.

The first ever meeting was a fine curtain-raiser for what has proven a fine managerial rivalry, as Borussia Dortmund ran out 4-2 winners against Bayern Munich in the German Super Cup.

Guardiola’s time with Bayern saw the Bavarians dominate the Bundesliga, though Klopp managed three wins – alongside a fourth on penalties – against the Catalan coach before both men departed Germany for the Premier League.

The following seasons have seen an intensifying rivalry between Liverpool and Man City as the two teams compete directly for major honours, sharing the last four Premier League titles between them.

Klopp has beaten Guardiola five times since making the move to Merseyside, including both legs of an unforgettable Champions League quarter-final meeting during the 2017/18 season.

Guardiola has lost just once of the previous seven encounters between the sides however, ahead of a huge Premier League showdown at Anfield this weekend.

The post Ranking the four coaches to beat Pep Guardiola the most during his managerial career first appeared on The Football Faithful.