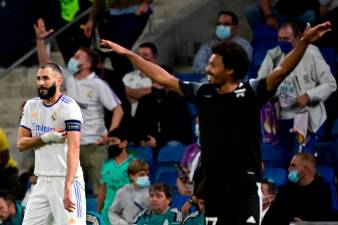 Sheriff Tiraspol said they had not been overawed on their first trip to the mighty Real Madrid – and proved it by winning 2-1 late on in one of the biggest upsets in Champions League history.

With all the talk of a European Super League for the elite, the minnows from the Moldovan league gave a timely reminder of the appeal of open competition.

“We didn’t just come here to sit around. We know how good our players are and luckily for us Madrid weren’t able to take their chances – and we took ours.”

For Sheriff this was only a second match in the Champions League group stage and the estimated value of their entire squad is €12 million (RM59m), about the same as the annual salary of Madrid defender David Alaba.

Real dominated but Sheriff scored two excellent goals and had a third disallowed for offside, and now have six points out of six.

Sebastien Thill, who has a tattoo of himself dreaming of playing in the Champions League, smashed in the winner in the 89th minute.

“It’s the best and most important goal of my career, that’s for sure,“ Thill said.

“The side were so brave with how we played and luckily enough I was able to score a bit of a stunner.”

Florentino Perez, the Real Madrid president, has said he struggles to get interested in Champions League group games and he might have wished he had missed this one.

Perez is one of the staunchest advocates of the aborted European Super League. But on the same day UEFA agreed to drop sanctions against the 12 clubs involved in the project, Sheriff reminded everyone that it’s not just about the perceived big boys.

The Super League was intended to put an end to seemingly unbalanced match-ups like these – and the occasional shock that comes with them – leaving a competition only for a self-selected elite.

The romance of Sheriff’s success is questionable given the club is owned by a conglomerate, called Sheriff, which effectively runs the pro-Russian separatist state of Transnistria, where the football club is based.

Yet it is hard to begrudge players like Thill their moment of glory.

“After this match we all went crazy. There are a lot of foreigners in the club, we come from all types of countries. It’s our strength,“ said Thill, who last season was playing on loan at FC Tambov in Russia, a club that was dissolved in May and had to declare itself bankrupt. – AFP