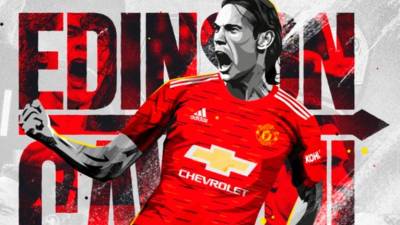 The 33-year-old Uruguayan signed a one-year deal in September after months without a club since leaving Paris Saint-Germain.

United have the option to extend Cavani’s contract for another season and Solskjaer suggested he expects the club to do so.

“At the moment he looks like he has a few years left in him so I wouldn’t say anything else,” said Solskjaer when asked if Cavani will remain for another season.

“He’s been a great influence and has made a great impact since he’s come here.”

Cavani has scored four goals in 13 appearances for United and came off the bench to set up Bruno Fernandes’s goal in Saturday’s 2-2 draw at Leicester.

However, Solskjaer dismissed suggestions Cavani’s role will be that of an impact substitute.

“He’s definitely a starter. You don’t classify a player of that quality as anything else,” added Solskjaer. “He’ll probably start more games that he will not start.

“He’s so meticulous and professional with his habits, everything about him shows why he’s had the career he’s had and, at the age he’s now, he’s still one of the fittest players we’ve got.”

Cavani will be available for the visit of Wolves to Old Trafford on Tuesday, but could soon be back on the sidelines after being charged by the Football Association with misconduct for a social media post.

Both United and the player said at the time that the word was clearly used in an affectionate manner and has different connotations in South America.

United have not beaten Wolves in four attempts since Nuno Espirito Santo’s men returned to the Premier League two and a half years ago.

But Solskjaer is hoping his side’s struggles at home early in the season have been blown away by a 6-2 thrashing of Leeds in their last outing at Old Trafford.

“We are improving definitely, we’re getting better and better at finding different solutions in different games,” said the Norwegian.

“But we know that Wolverhampton have got quality as well and they will give us problems if we’re too open.”

Victory could take United up to second in the Premier League table should other results go their way on Monday. – AFP