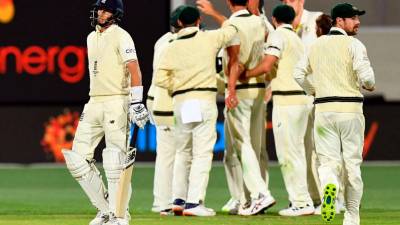 Joe Root’s men were bowled out for a paltry 68 on Tuesday as they slipped to an innings defeat in the third Test in Melbourne — handing Australia an unassailable 3-0 lead in the five-match series.

It was the latest in a string of woeful efforts with the bat — England have not once reached 300 in six innings in Australia.

Harmison, who was part of the England team that won the Ashes on home soil in 2005, said the “embarrassment” could prove to be a moment of reckoning for some in the England set-up.

“Last night, they (Australia) bowled brilliantly but that’s embarrassing, I’m sorry, no fight. There was nothing there.”

England — reigning world champions in the 50-over, white-ball format — have endured a chastening year in Test cricket, losing their series in India and tasting defeat at home against New Zealand.

Harmison said it would be short-sighted just to look at the roles of head coach Chris Silverwood and Root, who has had a fine year personally with the bat.

He was critical of the England and Wales Cricket Board’s (ECB’s) selection policy, saying there was no continuity of decision-making, meaning players did not know their roles in the side.

“At this moment now, England’s red-ball (Test) team is in a lot worse state than what the white-ball team was in 2015, when we left the World Cup with our tail between our legs,“ he said.

“And we pressed the reset button and I think we have to.”

“I think we need to have a look at everything we do with the red ball and that comes from the top all the way down to under-19 red-ball cricket and try and make sure it gets better and better and better,“ he added.

Former England captains Michael Atherton and Nasser Hussain both believe Silverwood should be dismissed after the dismal tour concludes.

“I can’t see a situation where Silverwood will survive this tour. All the responsibility lies with him as that’s the way Giles has set things up,“ Atherton told Sky Sports.

Hussain added: “When England went down the rotation policy at the start of the year, Athers said ‘let’s judge Silverwood by results at the end of year’. Well, England have lost nine Test matches, their worst-ever year.

“Those results speak for themselves so I think he is incredibly vulnerable.”

BBC cricket correspondent Jonathan Agnew said he would be surprised if Root stayed on as captain while the skipper himself told the BBC: “You can’t start looking at things too far in the future”.

Agnew, himself a former England Test bowler, said England’s domestic structure was not “fit for purpose”.

“The (first-class) County Championship has been marginalised to the fringes of the season for the convenience of playing more limited-overs cricket,“ he wrote.

“The ability to produce a solid defence has given way to the desire to hit ramps, scoops and towering sixes.

“The message from the authorities is the shortest formats are the only interesting or exciting versions of cricket.” – AFP