Real’s defensive injuries pile up as Carvajal latest to fall

Real’s defensive injuries pile up as Carvajal latest to fall 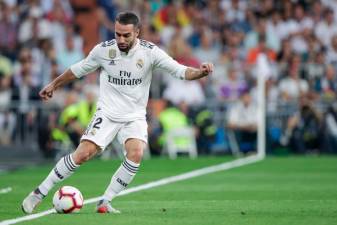 MADRID: Real Madrid rightback Dani Carvajal (pix) picked up a hamstring injury in training, the club said on Thursday as their defensive issues continued to pile up ahead of next week’s Champions League semifinal, second leg against Chelsea.

Local media reported that the defender could miss the European fixture next Wednesday as well as the La Liga title run-in as Real attempt to defend their league crown.

Real, who sit two points behind league leaders Atletico on 71 points and face Osasuna on Saturday, have not put a timescale on Carvajal’s return.

“Following the tests carried out today on our player Dani Carvajal by the Real Madrid medical department, he has been diagnosed with an injury to the semimembranosus muscle in his right leg,” a statement read.

Carvajal’s season has been blighted by injury and he has made just 15 appearances in all competitions.

Lucas Vazquez, who filled in at right back during Carvajal’s absence, has been ruled out for the rest of the season with a knee injury, while captain Sergio Ramos has a calf problem and has missed the club’s last nine games.

Left back Ferland Mendy missed the first leg against Chelsea, which finished 1-1, with a calf problem.

Marcelo, who filled in for the Frenchman on Tuesday, could also be absent next week after Spanish media reported he had been called up to work at a polling station in the Madrid regional elections. – Reuters