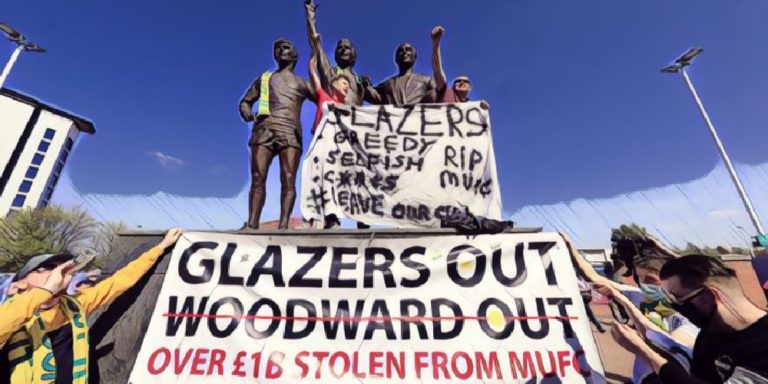 Ole Gunnar Solskjaer says it is ‘important’ fans are ‘listened to’ ahead of a planned protest outside of Old Trafford ahead of Manchester United’s clash with Liverpool this weekend.

Football fans have united in recent weeks in protest against the ownership of Premier League sides, the controversial plans for a European Super League having been greeted with fury from supporters over an attempted power-grab and demonstration of greed from Europe’s elite.

Manchester United were one of six English sides involved in the controversial plans before hastily withdrawing their interest and the Red Devils’ fanbase have voiced their want for the club’s maligned ownership to sell up at Old Trafford.

Over 10,000 fans are expected at a protest against the Glazer family ahead of Sunday’s showdown with Liverpool, with the ownership having come in for huge criticism since their heavily leveraged takeover.

Fans will now gather in the latest attempt to oust the American owners from power and Solskjaer admits it is important the fans’ views are listened to as bridges are attempted to be built between the supporters and hierarchy.

“It is important fans’ views are listened to and we communicate better,” Solskjaer said at his pre-match press conference.

“As I’ve said before I’ve been backed and had great support from the club and its owners and I am sure I will get backing again to go one step further.

“When the protests are on, is important they go in good fashion and that we keep it peaceful.”

The post Solskjaer says its ‘important’ fans are ‘listened to’ ahead of planned Old Trafford protest first appeared on The Football Faithful.