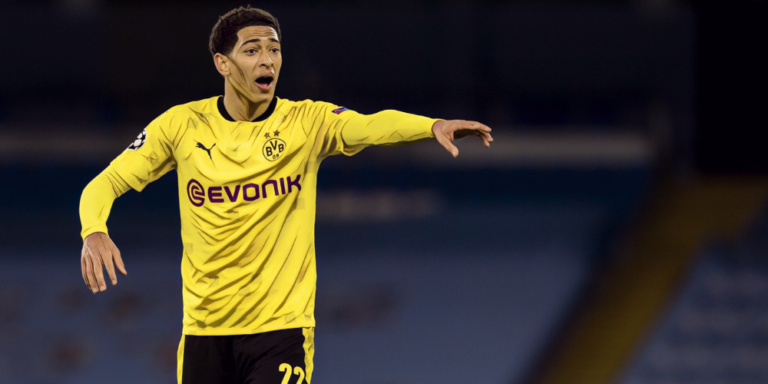 English footballers are venturing abroad more than ever before in search of new opportunities and challenges, major leagues on the continent now spattered with Englishmen.

Home-grown talents had previously been reluctant to leave England and their comfort zones and venture to new horizons, but several stars have shown the value of heading abroad in recent campaigns.

We’ve decided to look at five of the best performing English footballers abroad in 2020/21.

Jadon Sancho’s move to Borussia Dortmund is often referenced as a trailblazing moment, the winger moving to the Bundesliga after becoming frustrated with a lack of opportunity at Manchester City.

The move has proven an inspired one with Sancho since developing into one of world football’s brightest talents and a fully-fledged England international, talk this summer centring once again on the prospect of a record-breaking return to the Premier League with Manchester United linked.

Sancho has flourished at the Westfalenstadion to become one of the most exciting and productive wingers in the game, scoring 37 goals and providing 41 assists across the past three Bundesliga campaigns.

The 21-year-old endured a slow start to the current campaign following the uncertainty over his future last summer, though shone during the second half of the season to inspire Dortmund to DFB-Pokal success and a top-four finish.

Sancho was electric in the club’s cup final win over RB Leipzig, perhaps the perfect performance for the star to bow out from Dortmund with England calling.

He finished the season with 16 goals and 14 assists this term and will now hope to take that form into this summer’s European Championship.

Another player named in England’s provisional squad for this summer’s Euros, it has been far from out of sight, out of mind for Kieran Tripper since leaving Tottenham for Spanish football.

The right-back had endured a difficult spell with the north London side before his surprise move to Atletico Madrid, though has enjoyed a positive period following the change in culture.

Trippier has thrived in Diego Simeone’s defensive machine at the Wanda Metropolitano, whilst his creative quality has been evidenced with six La Liga assists this term for the newly-crowned champions of Spain.

The 30-year-old missed a period of the season through suspension due to breaching gambling rules, but has been an ever-present when available and a key part of Atleti’s first title success since 2014.

Question marks over whether Tripper’s attacking style would suit Simeone’s rigid system have been removed, the full-back winning the first major trophy of his career to vindicate his decision to push his boundaries and leave the comfort of the Premier League.

Inter Milan’s signing of Ashley Young was questioned by many after the arrival of the Manchester United veteran in a cut-price deal, though it has proven a shrewd investment and a fruitful move for both club and player.

Young has featured predominantly in a wing-back role for the Nerazzurri this season, who finished comfortably clear of the chasing pack to win a first Serie A title since the 2009/10 season and end Juventus’ dominance of the division.

The 35-year-old made 26 league appearances for the campaign, scoring once and providing four assists to provide a valuable contribution to Antonio Conte’s side.

Young has become just the third Englishman – after Jimmy Greaves and Gerry Hitchens – to win a Scudetto, and the first since the latter also achieved the feat with Inter Milan in 1963.

The wing-back’s future appears away from the San Siro as the club desperately look to cut costs this summer however, his contract not set to be renewed with reported interest from former club Watford.

The second Borussia Dortmund starlet to feature on our list of expats abroad, Jude Bellingham’s rise from the Championship to the Champions League has been remarkable.

Bellingham burst onto the scene at Birmingham City last term to become the club’s youngest ever player and goalscorer, making the move to Dortmund last summer despite well-documented interest from Manchester United.

It has been a brilliant decision for the midfielder who has made an immediate impact in Germany, making 46 appearances in all competitions and impressing with his mature displays on the Champions League stage.

Bellingham’s multi-faceted and box-to-box talents have also caught the eye of Gareth Southgate, who made the 17-year-old England’s third-youngest international of all time after handing the midfielder his debut in November.

Bellingham has continued to go from strength to strength and has been included in the provisional squad for this summer’s European Championship, an impact at that level not out of the question for a player who has taken giant steps comfortably in his stride this season.

Perhaps the least recognisable name on this list, Mavividi made headlines after leaving Arsenal for Juventus, becoming the first English player to represent the Bianconeri since David Platt in 1992 after making his senior debut in 2019.

The forward failed to make a breakthrough with the Italian giants before spending last season on loan at Dijon in France, a return of five goals in 24 league appearances enough to convince divisional rivals Montpellier to sign him from Juventus in a €6.3m deal.

The 22-year-old former England youth international has enjoyed a promising first season with the Ligue 1 outfit, scoring nine league goals as Montpellier finished the season eighth in the table.

Mavividi – who has been capped by England up to u20 level – is also eligible to represent Congo, though harbours ambitious hopes of breaking into the Three Lions senior set-up and will hope to build on a productive 2020/21 season next term.

The post Expat Watch: Five of the best performing English footballers abroad in 20/21 first appeared on The Football Faithful.