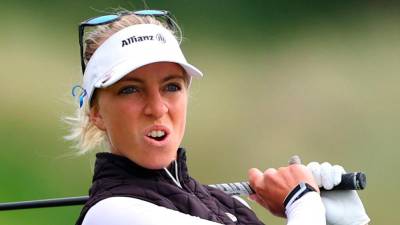 NEVADA: German Sophia Popov (pix) vaulted into the semifinals of the Bank of Hope LPGA Match-Play after two top-10 wins Saturday, including a 20-hole playoff victory over World No. 2 Inbee Park.

Popov eagled the 18th hole to force the playoff.

Popov is joined in Sunday’s semis by American Ally Ewing, Ariya Jutanugarn of Thailand and China’s Shanshan Feng. Popov will play Feng Sunday while Ewing takes on Jutanugarn in the other semifinal.

Popov defeated Park in the Round of 16, the knockout round, on the second playoff hole before defeating World No. 10 Patty Tavatanakit of Thailand 3&2 in the quarterfinals.

Popov trailed Park by two shots after 11 holes but birdied No. 14 and No. 16 to draw even. Park responded by winning the 17th hole on Popov’s bogey before Popov eagled the par-5 18th to square the match.

Popov said she was still confident even after the bogey on 17.

“I had a pretty good feeling about my game. I said, ‘You know what? If I can hit a good drive, I’ll have a short iron in.’ I smoked my drive down there, which is great,” Popov said about the 18th.”Then I had 152 to the pin …perfect 9-iron distance for me. Landed a couple short, came up the ridge, and came back down and it was good. So probably the ideal scenario in that moment.”

Then Popov clinched the victory on No. 11, the second playoff hole.

“We just had a great match the whole day,” Popov said. “She was just being her, playing super solid. Every good birdie look she had she made, and I knew that was going to be the case. So I just had to hang in there. I was hitting it great all day… It’s honestly been a nice reprieve because I’ve played with her a few times now over the last few months and she’s been kicking my butt. I kind of had it, so I was – it was my time this time.”

Ewing defeated two fellow Americans, Jenny Coleman on the first playoff hole of the knockout stage and Danielle Kang 1 up in the quarterfinals.

Jutanugarn advanced to the semis with a 5&4 win over Minjee Lee of Australia in the quarters. Jutanugarn downed Sweden’s Anna Nordqvist 4&3 in the knockout round. – Reuters