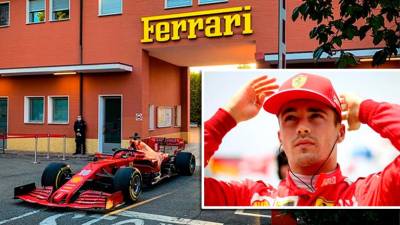 BELGIUM: Charles Leclerc (pix) warned Ferrari’s passionate fans not to expect any miracles in Sunday’s Belgian Grand Prix after he and teammate Sebastian Vettel qualified 13th and 14th on Saturday.

Leclerc, who claimed his maiden victory from pole position in last year’s Belgian race, admitted he and the team had no explanation for the team’s slump in form this season – ahead of the next two races which are scheduled to take place on homeground in Italy.

“It’s very difficult to find any explanation,” said Leclerc. “It’s a big step back to the others.

“We need to find the issue and address it. It’s not a good day, but it’s like this at the moment.

“We have got to work hard and we have to keep our heads up in tough times like this.

“We can understand the fans are disappointed, but we can’t expect any miracles.”

Four-time champion world Vettel who is in his final season with the team said: “This is the true picture of what our car can do. We tried everything.

“We are not where we want to be, but that’s not the first qualifying and first race where that has been the case.

“For myself, it’s my job and I still like driving. P13 and P14 is not as exciting as P1, but this morning it looked like we wouldn’t get out of Q1.

“So, obviously, it was not a success, but it is what we could do.”

Vettel had wound up 20th and last after third free practice on Saturday morning and Ferrari appeared to face a real prospect of seeing both cars proceed from Q3. Leclerc was only 17th.

Both were outpaced by three out of four of Ferrari’s customer teams running with Ferrari engines.

Team boss Mattia Binotto had warned on Friday that Ferrari faced a host of issues as they battled to find performance at the long, demanding and high-speed Spa-Francorchamps circuit.

The team has struggled this year with a power deficit to their rivals, but Binotto said it was not only this deficiency that hampered their speed, but also a struggle to warm up their tyres and find balance.

“We struggle to make the tyres work,” said Binotto.

“We are lacking grip, both in braking and acceleration. There is no overall performance to the car. So certainly the drivers are complaining about grip, overall grip.

“I think it’s the same situation on both cars so it’s not driver related. It’s really the way we set up the car in order to find the right window on the tyres.”

He added that it was a difficult challenge for the team to solve as they sought a well-balanced aerodynamic set-up for a track that always demands a precise level of down-force.

Three-quarters of the lap is driven at top speed, requiring minimum down-force, while the other quarter requires more down-force to cope with slower sections with corners.

The team’s struggles appear certain to continue next weekend in their home race at Monza, the Italian Grand Prix, where raw power and speed is essential for success.

One week later, they could be embarrassed again at their own 1000th race celebrations at the Tuscany Grand Prix.