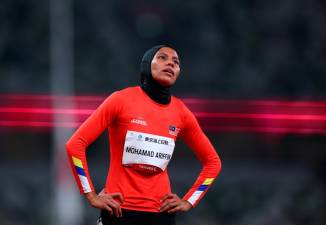 TOKYO: National runner Siti Noor Iasah Mohamad Ariffin is far from pleased with her performance despite having qualified for the final of the women’s 400-metre (m) T2 (intellectual impairment) category at the Tokyo Paralympics today.

She feels that her performance in Round One, Heat Two of the event at the Tokyo Olympic Stadium here could have been better had it not been for her lack of international exposure.

“It’s been a long time since I competed at the international level. The last time was in Brisbane, Australia in 2019.

“I can say that the competition this time was very challenging as there were many younger athletes who were faster than me,” Siti Noor Iasah (pix) , who is making her second Paralympic appearance, told reporters.

The Malaysian, who finished fourth in the final in her debut at the 2016 Rio edition, also hopes to do much better in the final tomorrow (Aug 31).

The 31-year-old from Johor finished fourth in Heat Two today, and seventh overall, in 59.89 seconds (s).

A total of 12 athletes took part in the event, with the top three from each of the two heats and the next two fastest qualifying for the final.

Breanna Clark of the United States, who competed in Heat Two with Siti Noor Iasah, set a new Paralympic record when she clocked 56.07s to erase Ukrainian Yulia Shuliar’s 57.58s that was set 10 minutes earlier in Heat One.