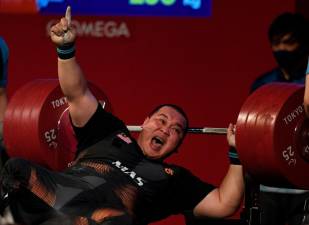 TOKYO: National powerlifting athlete Jong Yee Khie (pix) ended his team’s campaign at the Tokyo Paralympic Games by snatching the silver medal in a stunning performance on the last day of the discipline today.

The powerlifting team did not fail to deliver, with both Sarawakians bringing back medals in their respective categories.

Yee Khie, who hails from Batu Kawa, Kuching, had a rocky start to his second Paralympic Games appearance when he failed to complete his first attempt of 230 kg, but came back to win the silver in his second attempt with a lift of 237 kg.

The gold medal, however, eluded the 32-year-old when he failed in his third and final attempt of lifting 245 kg.

Yee Khie’s win is a significant improvement over his last appearance at the Paralympics when he came in seventh in the 97 kg category at the 2016 Rio Games.

The gold today went to Mongolian Sodnompiljee Enkhbayar with his best effort of 245 kg while Iranian Saman Razi had to be contented with the bronze after lifting 231 kg.

Sodnompiljee had earlier smashed the old Paralympic Games record of 238 kg set by Pavlos Mamalos from Greece at the 2016 Rio Games with a lift of 241 kg. His record did not stand for long when he erased it with his gold-winning second attempt of 245 kg.

The 26-year-old will meet world no 47, Qi Zhang from China, in the quarter-finals scheduled to take place at 4 pm tomorrow (3 pm Malaysian time).

At the Tokyo Olympic Stadium, Siti Noor Iasah Mohamad Ariffin advanced to the final of the women’s 400 metres (m) T20 (intellectual impairment) for the second consecutive time, matching her performance at the 2016 Rio Games.

The 31-year-old Johorian finished fourth in the second heat today and was seventh overall out of 12 competitors, with a time of 59.89 seconds.- Bernama