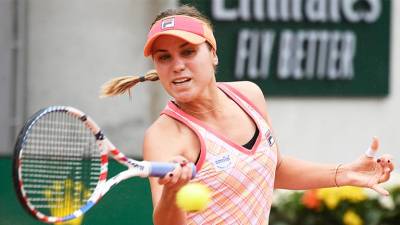 PARIS: American fourth seed Sofia Kenin recovered from a mid-match slump to defeat big-hitting Liudmila Samsonova 6-4 3-6 6-3 in a rain-interrupted first round match at the French Open on Tuesday.

Australian Open champion Kenin arrived in Paris after a 6-0 6-0 pounding by Victoria Azarenka in her only claycourt contest in Rome and was facing the 125th ranked Russian for the first time in her career.

After an early trade of double breaks, Kenin broke Samsonova in the ninth game and held serve to take the opening set.

The players then left the court due to rain and when they returned Kenin quickly found herself down 3-0 and then 5-1 as Samsonova started painting Court Suzanne Lenglen with winners off her forehand and backhand.

Kenin said the rain delay affected her and she was too anxious to go out and play.

Despite the double break, the diminutive Kenin did not give up and got a break back just before play was halted again after the Russian complained of slippery court conditions.

When play resumed, Samsonova managed to hold her next service game to take the set and then broke her fellow 21-year-old’s serve in the decider to take a 2-0 lead.

“I’m obviously really fierce and I’m not going to give up, said Kenin. “I really love winning. I play to win.

“I get pretty hard on myself when I’m not winning and pretty upset with myself,” added the American, who threw her racket down in frustration a few times.

Kenin changed her strategy and started hitting a lot of loopy high balls deep into the Russian’s court and it worked as she levelled things and then got the crucial service break in the eighth game.

She converted her first match point when Samsonova, who again failed to get past the first round at a Grand Slam, sent a backhand wide.

Kenin believes that winning the Australian Open has made her a more confident player.

“Going into tournaments, when I’m high seeded I feel like people are watching me, just a bit more pressure from the outside,” she said. “But that’s obviously good, means like they know I’m fierce, tough, not an easy opponent.”

In the second round, Kenin will meet Ana Bogdan after the Romanian defeated Timea Babos 6-4 6-2. – Reuters