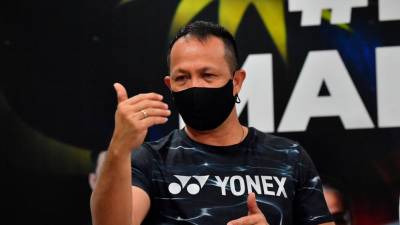 KUALA LUMPUR: It is more practical and suitable for Badminton Association of Malaysia (BAM) doubles coaching director Rexy Mainaky to be on the court training the players, rather than receiving reports from other coaches, says former national player Roslin Hashim.

Roslin, who was ‘shocked’ by the restructuring of the coaching lineup announced by BAM, drew attention to the fact that it would be a loss for the sports body if Rexy held the new position.

He said this was because the doubles expert from Indonesia would perform best when working hands-on, as he had previously successfully guided Koo Kien Keat-Tan Boon Heong to win gold at the 2006 Asian Games, besides helping to improve the performance of the Thai squad as its head coach, including guiding the Uber Cup team to reach the final for the very first time in 2018.

“When he came back to Malaysia…his function as a coach is almost non-existent, we want his expertise in terms of coaching players, but now, in this position, he only receives reports from the coaches.

“This means he may not be on the court to train our players, and based on my understanding, Rexy does not seem to have a coaching function, because all the coaches are under him. If so, it is a waste to bring Rexy to BAM,“ he said when contacted by Bernama today.

Roslin, who won the men’s singles gold in the 2001 SEA Games, also questioned BAM’s move to restructure the coaching line-up, as it only served to complicate things further by dividing the posts to evaluate players into two.

“What is BAM really trying to do? For me, Choong Hann alone is enough to evaluate all the players, as he did previously,” he added.

According to BAM’s Coaching and Training Committee chairman Datuk Kenny Goh, the new approach would see coaching directors being able to focus more on their respective departments, and come up with solutions to issues more quickly.