Switzerland come from behind to beat US in Euro warm-up

Switzerland come from behind to beat US in Euro warm-up 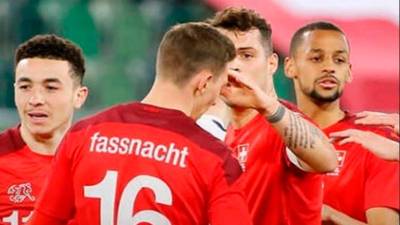 ST GALLEN: Switzerland rode their luck to beat the United States 2-1 in a friendly international on Sunday and make a winning start to their European Championship preparations.

The home side, who share Group A at Euro 2020 with Italy, Turkey and Wales, came from behind to beat a youthful American side, who had plenty of chances to win the game as they look ahead to the Concacaf Nations League final stages in Colorado.

Substitute Steven Zuber claimed a 63rd-minute winner as the Swiss overcame a sloppy firsthalf showing, and profited from some poor American finishing, to keep up their unbeaten run this year.

Sebastian Lietget had the visitors ahead after five minutes, expertly tucking home a shot from just inside the penalty area after Switzerland had failed to clear Giovanni Reyna’s cross.

Their lead lasted only five minutes before Swiss leftback Ricardo Rodriguez crashed home a shot, with the help of a deflection off Reggie Cannon.

Rodriguez might have had a second goal but put wide a penalty just before halftime after Dutch-born American fullback Sergino Dest had handled the ball.

Lietget, Dest and Joshua Sargent all had firsthalf chances for the visitors, keeping the experienced Swiss goalkeeper Yann Sommer busy.

After the break it was the US keeper Ethan Horvath in the thick of things, twice denying good scoring chances for Breel Embolo and seeing Remo Freuler and Haris Seferovic conjure up poor misses in the last 10 minutes.

Switzerland next meet tiny neighbours Liechtenstein in St Gallen on Thursday before they open their Euro 2020 campaign against Wales in Baku on June 12.

The US take on Honduras in a Concacaf Nations League semifinal in Denver on Thursday and will meet either Mexico or Costa Rica in the final or the third-place playoff.

Finland v Russia: Eriksen impact will go on but Kanerva hopes players can focus on football