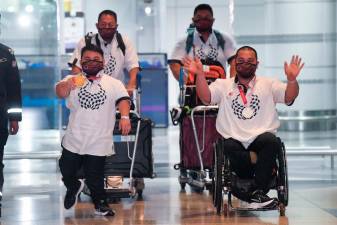 The two powerlifting hercules, who left the Narita International Airport, Japan at 10.20 am today on Malaysian Airlines Flight MH9117, landed safely at KLIA at about 5.20 pm with national coach Jamil Adam.

Upon exiting the arrival hall, after completing the Customs and Immigration checks as well as Covid-19 tests, they were received with shouts of ‘Demi Malaysia’ by Youth and Sports Minister Datuk Seri Ahmad Faizal Azumu, his deputy Datuk Seri Ti Lian Ker, National Sports Council (NSC) director-general Datuk Ahmad Shapawi Ismail and representatives from the Paralympic Council of Malaysia (PCM).

Gold-medallist Bonnie and silver-medallist Yee Khie then spent some time for a brief media conference before boarding a bus to the hotel for the compulsory 14-day quarantine.

The national powerlifting camp can be proud of their athletes’ achievements, especially after Bonnie won the country’s first medal – a gold – at the Tokyo Paralympics en route to setting a new Games record of 228 kilogrammes (kg) in the men’s 72kg category on Saturday (Aug 28).

Yee Khie, then, added a silver in the men’s 107kg category Sunday (Aug 29) when he lifted 237kg at the Tokyo International Forum.

Meanwhile, Ahmad Faizal, when met by reporters, hoped that the success of the two powerlifters would motivate the national contingent to achieve more successes at the Tokyo Paralympics.

“Thankful at being able to welcome home Bonnie and Yee Khie. All arrived home safely and they were very enthusiastic about coming back on the day the country celebrates its 64th National Day. They have proven that Malaysians are capable of standing tall on the world stage.

“We now have Chew Wei Lun, who won his Boccia semi-finals today and will face world number one David Smith of Great Britain in the final tomorrow. I am confident of his ability,” he said.

Earlier, Wei Lun had advanced to the final after beating world number 18 Andre Ramos of Portugal 9-5 in the last four of the mixed individual BC1 (physical impairment) category to create history by becoming the first Malaysian boccia athlete to win a medal at the Paralympics.- Bernama

What makes Cowboys’ Amari Cooper one of the NFL’s best route runners?

Highlights: Arsenal’s own Salah steals the show with screamer in top-of-the-table U23s meeting with Man City