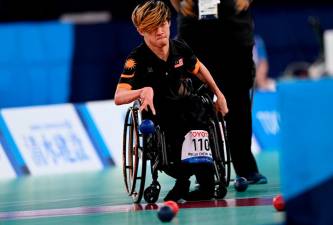 TOKYO: National boccia player Chew Wei Lun (pix) is one step away from marking his Paralympic debut with a gold medal after qualifying for the final tomorrow (Sept 1).

Wei Lun booked his spot in the final after downing world number 18 Andre Ramos of Portugal 9-5 in the semi-finals of the mixed individual BC1 (physical impairment) category in the Tokyo Paralympics at the Ariake Gymnastics Centre here today.

The Malaysian, however, can expect a stiff challenge in the final as he will be up against Great Britain’s defending champion and world number one David Smith, who defeated Brazilian Jose Carlos Chagas de Oliveira 7-4 in the other semi-final.

Earlier in the afternoon, world number 11 Wei Lun had defeated China’s Qi Zhang 4-2 in the quarter-finals.

With his semi-final win, Wei Lun has now gone six matches unbeaten, including in his four Group B games, since Saturday (Aug 28). – Bernama