Eight of the last nine renewals have gone to six-year-olds, so that is the age profile for this race. Seven of the eight most recent favourites delivered, so traders on horse racing betting sites have the market right quite often here. All but one of the last 11 winners last ran within the previous 35 days.

A couple of outings beforehand is another common thread with 70 per cent of the 10 most recent victors. Ratings can’t tell us a great deal as many came to this race without official assessment. Those are the main stats and trends, so who do the tipsters like for the Lawlors Of Naas Novice Hurdle this year?

Gordon Elliott has trained the winner of three of the last five renewals and saddles two in the Bective Stud silks of Noel and Valerie Moran this time. The early market believes this is a clash on paper between owner-stable companions Hollow Games and Ginto. It’s the former who opened with the shorter odds with an unbeaten record of five career starts.

Hollow Games, now a six-year-old Beat Hollow gelding, landed his Irish Point at Turtulla by 30 lengths. He then followed-up in a couple of bumpers at Punchestown and then during the Leopardstown Christmas Festival before being put away. Elliott already had his eye on hurdles. Hollow Games made a successful reappearance over 2m 6f at Down Royal. What he beat at a 1/9 price that day can be questioned.

There is more substance to the form of his Grade 3 Monksfield Novice Hurdle victory at Navan last time out, however. Hollow Games put 2 1/4 lengths between himself and subsequent Thurles Listed scorer Lunar Display once he went clear at the last. Davy Russell again takes the ride, so that is why this type makes this an event to tune into horse racing live streaming for and heads the betting at 11/8.

Back Hollow Games with 888Sport

Four the last eight winners of the Lawlors Of Naas Novice Hurdle also took the Grade 2 Navan Novice Hurdle over the same trip en route. Also out to do that double is Elliott’s other runner is the aforementioned Ginto. On paper, the form of his success there last time out looks a lot stronger. Ginto, now a six-year-old son of Walk In The Park, has just one defeat in five career starts.

He has left an odds-on reverse in a Fairyhouse bumper this time last year well behind him since, however. Ginto didn’t land his Irish Point by such a wide margin as Hollow Games, but the runner-up has come out and won twice over hurdles this winter. All three successes under Rules have been at Navan for the Elliott stable’s apparent second string.

After winning both a bumper and a maiden hurdle either side of a summer break, Ginto made an effortless step up in grade with an 11-length romp. He has seen the Navan Novice Hurdle form advertised in spades by the runner-up, Eric Bloodaxe, winning a Grade 2 at Limerick last week. Mr Fred Rogers back in third has since upset previous Listed winner Nell’s Well at Thurles.

There is greater depth to the form, then. Ginto gets the services of Jack Kennedy in the saddle once more, so a bold bid looks assured. The only negative is his tendency to jump slightly right. Ginto should handle the forecast heavy ground, so could be a value alternative to the favourite and his owner-stable companion at 2/1 here.

Bet on Ginto with 888Sport

Willie Mullins has trained a record eight winners of the Lawlors Of Naas Novice Hurdle since 2005. There is no second guessing about who is the best horse from his Closutton stables as he relies solely on Whatdeawant. The conqueror of Ginto in that Fairyhouse bumper 12 months ago remains relatively unexposed to the Elliott pair after just three racecourse outings.

Whatdeawant was then far from disgraced after that successful debut when third to stable companion in the Grade 2 Dublin Racing Festival bumper at Leopardstown. He was never near to challenge the front two, Kilcruit, who became Irish Champion National Hunt Flat race winner at Punchestown, and Letsbeclearaboutit, who won at Fairyhouse in April.

As Whatdeawant beat impressive Clonmel bumper scorer Harald Hardrad going away on his hurdles debut at Navan last time out, he can only improve for that first try over obstacles. He rates a real danger to the top two in the betting at 9/2. Get on Whatdeawant before Best Odds Guaranteed applies because it would be no surprise if his price shortens and he makes the big step up in grade and landed the spoils here.

Three of the seven runners declared for the Lawlors Of Naas Novice Hurdle opened at 20/1 and bigger. The only other horse with any sort of chance on paper is Grand Jury, who represents last year’s winning connections of jockey Rachael Blackmore, owners Robcour and trainer Henry De Bromhead.

This Tiger Groom gelding has won an Irish Point, bumper and maiden hurdle all going right-handed. Naas is an anti-clockwise track in terms of configuration. How Grand Jury will handle going the other way around remains to be seen. He now steps up in trip to 2m 4f for the first time but appears to handle any ground.

Grand Jury made his challenge at the final flight at Punchestown, where he has done all of his racing under Rules to date, and won his maiden hurdle comfortably. He only finished fourth in a colts and geldings bumper there at the Festival, yet he may be better on the much softer surface he encounters here. Grand Jury needs to make a big step up on all known form to have a say in the finish of the Lawlors Of Naas Novice Hurdle, though. Best odds of 15/2 on online betting sites reflect that.

Bet on Grand Jury with 888Sport

888Sport New Customer Offer – Bet Through the Card at Naas 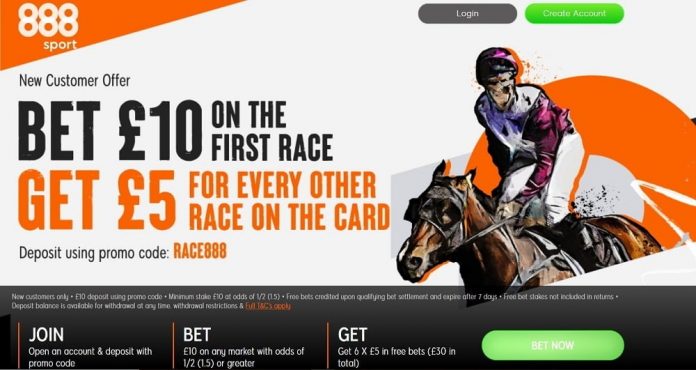 The Lawlors Of Naas meeting on Sunday, 2 January has seven races on it and therefore qualifies for the bet through the card 888Sport new customer offer. Sign up and deposit at least £10 via an eligible payment method, using promo code RACE888, then wager £10 or more on the first race (12:30) on a horse with minimum odds of 1/2 (1.50). Once that bet settles, receive 6x £5 free bets for the other races. Additional terms and conditions apply.

Our experts thought Jeremys Flame ran really well in defeat by Concertista in a Cork Grade 2 novice chase last time out. She could well cash in on a big drop in class, especially as the winner followed-up in the Dawn Run Novice Chase at Limerick over Christmas. When depositing, avoid PayPal, Entropay, Paysafe, Neteller or Skrill as payment methods as these are incompatible with the offer. Follow these five steps to get the bet through the card 888Sport welcome bonus: